I read the extensive discussion yesterday on the difference between strains and tears, and I thought maybe I could help clear some stuff up. My credentials probably don't venture into the definition of "expertise," but I have an extensive background in molecular biology, which is the basis for physiology and kinesiology.

First, some background on how muscles work. 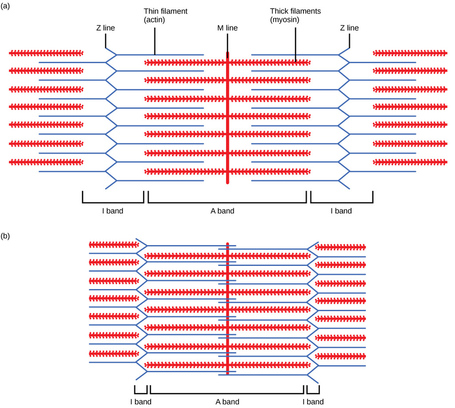 When an athlete stretches, as in before some sort of dynamic activity, one is pulling those thin filaments farther and farther apart, in essence "priming" the muscle cells for quick back and forth movement. Obviously, this sort of stretching does not harm the cells, and therefore causes no injury to the muscle.

Athletic injuries to muscle tissue are all basically the same, but their severity differs - concordantly, the verbiage used to describe such injuries varies with the severity of the injury. Skeletal muscle cells are extremely long, so are better known as muscle "fibers." These fibers are multinucleated (the majority of non-muscle cells only have single nucleus) and can span the entire length of the muscle tissue. Because they are so long, overstretching, which is better described as tearing, doesn't simply pull cells apart from each other, which wouldn't have many harmful and painful effects, but instead ruptures the entire cell. This is bad for the surrounding cells, because all of the stuff that was once inside the now ruptured cell is free to flow around and damage the other cells. When muscle cells tear, nerve cells and vascular tissues tear as well. This causes the pain and the bleeding. Moreover, the body immediately rushes extra blood to the area, which is why the injured area becomes red and sometimes bruised, carrying with it immune cells (white blood cells). These immune cells help to clean up all the bad stuff. A combination of damage to healthy cells and immune cell cleanup causes inflammation, causing the extended pain and tenderness.

To clear up the argument from yesterday - every single injury is some sort of tear. The difference, as stated earlier, is the severity. In general, a "strain" is the overstretching of the muscle that results in a tear of all or part of that muscle. The Grade of the strain correlates to the percentage of the muscle that is torn (Grade I, for instances, is around 5-10% torn muscle). Generally, we colloquially use the word "torn" to indicate a complete tear of the muscle, even though this is better described as a Grade III strain. A Grade III strain needs surgery to properly heal, a Grade II or I strain will usually heal on its own.

Here's a simplistic image, but it gets the point across. 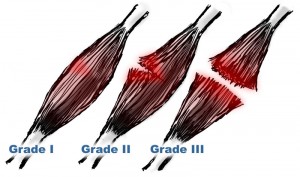 Differences between grades can be diagnosed by a variety of methods, but an MRI is usually best (see below). You won't be able to see much actual muscle damage when looking at a Grade I strain, but you will see some swelling and fluid buildup (edema). In contrast, Grade II and Grade III strains will show up clearly on an MRI as inconsistent muscle architecture and will be associated with a significant amount of edema.

Here are two images from the same patient with two different injuries in the gastrocnemius (calf). This first image is a Grade I strain; you can see the muscles look pretty normal (left panel), but the white area in the middle of the muscles (blue arrows) shows edema and a bit of muscle damage.

In contrast, a Grade II strain shows a lot more edema, and the buildup is actually compressing the entire calf muscle (right panel), as well as some alterations in muscle architecture (left panel). Basically, the bottom of the calf isn't supposed to look like that.

So, hopefully that clears up the argument that was had yesterday.

Next, I'd like to comment on why I think Lorenzo Cain was sent to the DL. Typically, Grade I strains don't need very long to heal (3-7 days). The key, though, is that if the muscle is used in high stress situations, there is a likelihood of further tearing the muscle and turning a Grade I strain to a Grade II or III strain. Cain has a propensity to turn minor injuries into major injuries, so the Royals training staff will rightly proceed with caution.

The second and maybe more important issue is Bruce Chen. In my opinion, if Bruce Chen wasn't experiencing some glute tightness, Cain wouldn't have gone on the DL. It's really hard to roll with a roster with two guys listed as Day-to-Day. Let's say Cain didn't go on the DL and maintained his spot on the 25 man roster. If for some reason Chen can't pitch tomorrow, Duffy can make a spot start without any problem. However, that severely depletes the bullpen, and we can end up running out of relievers really quickly, especially if Vargas or Duffy implode early or a game goes into extra innings. I think the Royals had to choose to put either Chen or Cain on the DL to make sure they had enough depth in the bullpen and on the bench. As in one of the articles yesterday, the Royals roster was well prepared for an injury in the outfield, and they want to be cautious with Cain, so the logical choice was to let him sit out for a couple weeks.