Invariably, the SSS argument always seems to pop-up. When is there enough data to draw a meaningful conclusion? Is the sample size large enough to mean anything? The great thing, is that you can answer these questions with some simple statistics.

In particular, I injected a witty comment into a fanpost that can be seen here regarding Salvador Perez and his offensive statistics relative to having a day off previously versus when he did not. Someone said there may be enough of a sample size and someone else questioned whether that was true. So, I did what any good basement dwelling dork would do; I went to fangraphs and exported all of Salvy's game and plate appearance into a spreadsheet that you can find here (note: two separate worksheets). I manually added columns to the game spreadsheet to identify when he had a day off prior (either rest or team day off), whether he played catcher and for each particular game, how many days in a row that he had played as of that day's game.

*NOTE - There are a handful of games where Salvy either played 1B, DH or came in as a PH. In order to control for this I eliminated any game from the sample where he had only 1 PA or less and included them as a 'day off'. You can rip my dirty stats; it won't bother me. 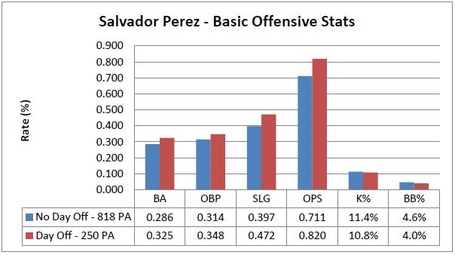 But wait, how do we know if the sample size is large enough? Should we just argue it out by using our gut instinct? Again, great thing is that you can figure this out using simple statistics.

In conclusion, there is a difference in Salvy's performance depending on whether or not he had a day off. However, there is not enough data to prove it is anything other than random chance. However, if you start combining this data with other data points (such as direct observation or measurement of perception) you can make a basic inference that may or not be true.

And then we can argue about it.