The Royal reliever is experiencing a drop in velocity.

Share All sharing options for: Aaron Crow is running low on gas

His average velocity is down across the board in the early going of 2014. According to a recent McCullough article, it's not exactly raising any red flags in the Royals camp:

Yost conceded he was aware of the velocity drop - "I see it, I notice it" - but suggested the cold temperatures of April and the time of year caused the phenomenon.

"His velocity is down two or three miles an hour," Yost said. "But it's early in the year, and he's still building up arm strength. They're still getting their arms underneath them, if you will."

First, you (darn) well better be concerned about velocity. Especially when it's down across the board. 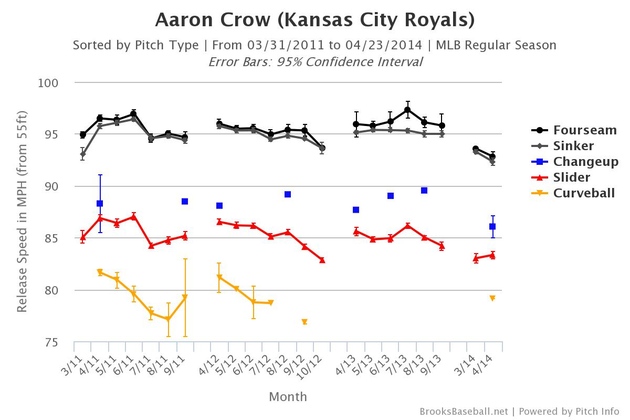 It's not just his fastball, it's all of his pitches. That pretty much puts to rest the idea he's sacrificing velocity for command. I could maybe buy it if it was just his fastball. Maybe. But it's not only his fastball that's arriving at the plate with less urgency than usual. It's also his two-seamer and slider. Those are his three pitches. To be down in velocity on all three suggests something is going on.

Now, as for the idea the time of year (it's April, you know) and cold temperatures have something to do with Crow's diminished velocity, let's just call bullshit on that one. Crow's fastball has never suffered in April, when the weather is a little colder. The graph above clearly illustrates that.

The Royals maintain they're not worried about Crow's drop in velocity. Of course. The question is: Should we be worried? Should we worry for the Royals?

Yost and Dave Eiland say they're happy with the way Crow has been commanding the ball. Particularly his two-seamer which features some heavy sink. Crow has been keeping that pitch down in the strike zone and it's been a great pitch for him thus far. He's getting a ground ball in 66 percent of all balls in play off his sinker and one has yet to go for a base hit. I'd say that's pretty decent. Maybe it's notable that all three of the hits Crow has allowed so far have come on his four-seamer. Small sample size and all.

Speaking of small sample sizes, this is where the stats get tricky. I will point out that Crow has whiffed just four batters in seven innings. That works out to a 5.1 SO/9 which isn't good. Not when his career rate is a strong 8.8 SO/9. Or how about Crow's swinging strike rate of 9.1 percent, which well off his career mark of 11.8 percent. The guy has thrown what amounts to less than a complete game, so I'm not going to throw a bunch of numbers out there and claim they are gospel. But I will point to them and say that they continue watching.

For all the positive talk about Crow's improved command, his walks are just down a tick in the early going. He's posting a 3.9 BB/9 which is slightly lower than last season's 4.1 BB/9. But another trend to watch in the early going is pitches that find the strike zone. Currently, around 39 percent of Crow's offerings would be called strikes. That's way down from his career average of 44 percent.

What I find most interesting in the early days of the season has been Crow's pitch selection. 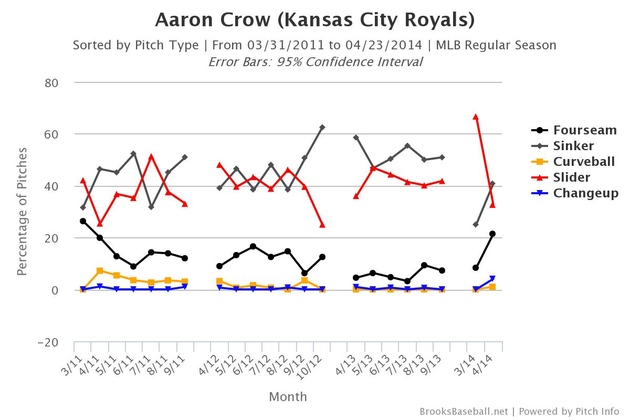 Despite his alleged conscious easing off the gas, he's throwing more four-seamers than ever. Let's revisit the article from the Star:

Part of the decrease, Crow explained, stemmed from a reliance on his two-seam sinker, which tends to arrive slightly slower than his four-seamer.

Whoops. Crow is actually throwing more four-seam fastballs at the expense of his two-seam fastball. If Crow's hypothesis were true, his velocity would be down last year where a two-seamer nearly 50 percent of the time and up this year when he's offering it only around 40 percent of the time. And fewer sliders, which as we know is a pitch that can put some serious stress on the arm. Even with limited data, I think we are seeing a guy who is trying to battle through something. Right now, it's working for him, but there could be some larger issues down the road.

What we have is an issue, a lot of false assumptions about the issue from player and manager, and a bunch of unanswered questions. Dealing with such a small sample size, I don't know if we could even point to current data as a trend. It's embryonic. However, it still bears watching going forward.