Royals vs. Angels series preview: Movin' on from Moustakas

Share All sharing options for: Royals vs. Angels series preview: Movin' on from Moustakas

The Royals and Angels actually used to be heated rivals. From 1976-1986, either the Royals or the Angels would reach the playoffs in every season except one (1983). Five times over that period the two clubs sat one-two in the standings. Then the Royals began to decline, the Angels went through silly name changes, and a new divisional format tore the two rivals apart. Now they're just a rival that I used to know.

The Royals face the Angels for the first time this year, after dropping five of seven to the Halos last year. The Angels have won eight of their last ten and are 5-2 on their current homestand so far against the Rays and Astros. By a weird quirk in the schedule, the Royals head west to Anaheim for just three games before turning around and heading home. They won't even have time for Disney Land.

The Angels are 26-20 this year, 3.5 games back of the Athletics in the Western Division. They are fourth in the league in runs scored, and fifth in runs allowed. They are third in home runs with 50, led by Albert Pujols with 13. They have slugged much worse at home though, with a .389 slugging percentage in Anaheim, compared to .450 on the road. 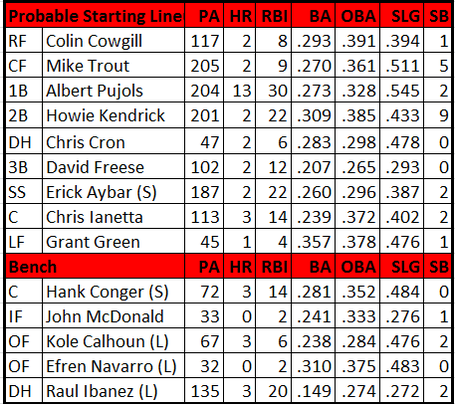 This is just a best guess at a starting lineup, the Angels have been mixing and matching all season due to injuries and ineffectiveness. Raul Ibanez is in a bit of a platoon situation with rookie Chris Cron, although with the way he is struggling, he may not even hit much against righties. Catcher Chris Ianetta has been splitting time a lot with young Hank Conger, and you will probably see Calhoun and Navarro get the start against right-hander James Shields.

Josh Hamilton is out til at least June with a thumb injury, but Albert Pujols has bounced back from a disappointing 2013 season to put up some power numbers, although his on-base percentage is down from even last year's poor showing. Fangraphs suggests Pujols' power numbers are due to regress, and our old pal Jeff Zimerman shows that Pujols is the most pull-happy right-handed hitter in baseball.

Mike Trout is scheduled to return after missing a game with a hamstring injury. Mike is his usual awesome self, although his walk rate is down slightly (12.2% from 15.4%) and his strikeout rate has spiked way up (27.3% from 19.0%). Trout is not concerned about the strikeouts, but he has had the biggest drop in baseball percentage of balls in play on swings. 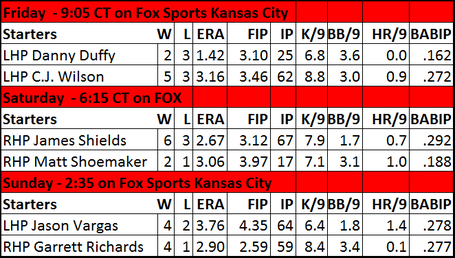 The Angels have had a large split, pitching much better on the road (2.88 ERA) than at home (4.30 ERA). Opponents have a .698 OPS against them in Anaheim, with just .588 OPS in Angels road games. Of the 41 home runs given up by Angels pitchers, 24 have come at Angel Stadium.

Ernesto Frieri has served as the primary closer, and while has a 4.91 ERA, he has an impressive 23-4 strikeout-to-walk ratio in 18.1 innings. Free agent Joe Smith has also gotten in for some saves and will be used as a righty-killer. The Angels currently do not have a left-handed reliever in their bullpen, which bodes well for Eric Hosmer and Alex Gordon.

Don't forget the late West Coast start time tonight. The Saturday game is a nationally televised FOX game with a 7:15 start time, which is still early evening out west, which could make for some difficult shadows for hitters to pick up the ball against.

I will toy with this format, so let me know if there are stats or other information you'd like to see in the series preview, which will be a regular item going forward. I know Craig used different stats and I used some more traditional stats, so any feedback you can provide on what you'd like to see would be helpful. Thanks.