Have a terrific Memorial Day everyone.

Share All sharing options for: Royals Rumblings - Royals news for May 26, 2014

As assembled by the Royals Review staff.

In case you missed it, last Friday Sam Mellinger went after the Royals for, well, being babies. He calls them out for the radio station boycotts, the defensiveness against the media, and tells them to man up and win games.

Big-league baseball is more player-controlled than any other major sport, so this has to be on the players to fix. That means ace pitcher James Shields has to do even more to change where this team is mentally and with accountability. First baseman Eric Hosmer has to mature into the All-Star he’s supposed to be. Catcher Sal Perez needs to remind the teammates who look up to him what really matters, and what really doesn’t.

Bluntly: It’s up to the best players on the team to make these things happen.

Because this is a talented group but not accomplished enough for some of the arrogance being shown. A promising group, but without the kind of margin for error to waste time with irrelevant drama.

Oh, and check the comments for an awesome cameo.

Ned says Mike Moustakas had clearly lost his confidence, and needs to find some success.

"You do this job long enough, you can read players through their body language," Yost said. "His confidence just wasn't there."

Ah, so he's not a mind reader, he's a body reader.

Danny Valencia is expected to miss a few games after injuring his hand in Saturday's win. So if you wanted to get a look at Jimmy Paredes, now is your chance. Nori Aoki will also be out for tonight's game with an elbow injury, which is a bit of a relief after the way he's played this year.

If you missed the transaction over the weekend, the Royals sent catcher Francisco Pena back to Omaha to give them two catchers now that Salvador Perez is healthy enough to play. They recalled pitcher Michael Mariot to give them eight pitchers in the pen after the thirteen inning marathon on Saturday. With the bench down to Brett "O-fer" Hayes, an injured Danny Valencia, and an injured Nori Aoki, the club could make another move today. Omar Infante is expected to re-join the Royals sometime during this series.

Andy McCullough had a really excellent piece about Lorenzo Cain and how he came to baseball late. We must find video of him singing Biz Markie's "Just a Friend."

Lee Warren caught video of Mike Moustakas' first interview with the Omaha media. You can read about it here. Moose was 0-4 in his Omaha debut, but homered on Sunday.

"You never want to go backward, but every now and then you've got to take a step back to jump forward. I'll get some work in and we'll see where we're at in a couple of days."

Manny Ramirez has signed with the Iowa Cubs to be a player-coach. This has all kinds of awesome written on it.

If you can't beat the Royals, you get sent to AAA.

For you legal nerds, baseball is currently fighting to protects its territorial media rights in federal court. The fans demand Rex Hudler be made available to all!

Minneapolis has landed the Super Bowl, passing over the application by Edson, Kansas. I love the sign "Road to Goodland (DO NOT GO TO GOODLAND)"

Grantland asks "Are we at peak super-hero"? We'll know when Royalman gets his own movie.

The best photos from a German finger-wrestling tournament.

Everyone bow down to Daloath: 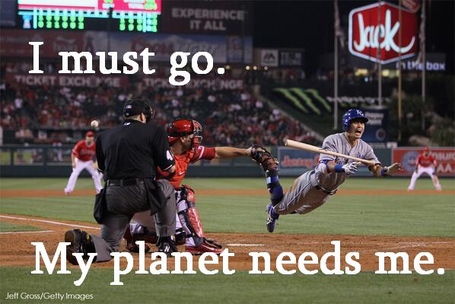 And the entire Royals Review staff would like to thank all the men and women who have honorably served this country, allowing us the freedom to be critical spirits. Thank you and have a terrific Memorial Day.