Astros Series Preview: Remember when we were this bad?

The Astros come to town, marking the last time the Royals get to face a losing team for awhile.

Share All sharing options for: Astros Series Preview: Remember when we were this bad?

The Houston Astros are 19-32 which is bad, but perhaps not as bad as people thought they might be. Its a pace to win 60 games, so that kind of record should be pretty familiar to long-time Royals fans. Still, many around baseball agree the Astros are losing the right way, tearing down the organization down completely and rebuilding from the ground up with a sabermetric philosophy in mind. The early returns haven't translated to wins, but by every indication, the franchise is headed in the right direction.

The Royals swept the Astros down in Texas back in mid-April, and another sweep would be a nice outcome this week. The Astros will be the last team with a losing record the Royals will face for the next two weeks, as the Blue Jays, Cardinals, and Yankees all loom on the Royals schedule.

Five Astros hitters have more home runs than anyone on the Royals, including rookie George Springer, the uberprospect who has come out of the game hitting well. Springer is an exciting five-tool player, but he strikes out nearly a third of the time. That hitting philosophy is shared by designated hitter Chris Carter, who led the league in strikeouts last year, and is third in the league this year. 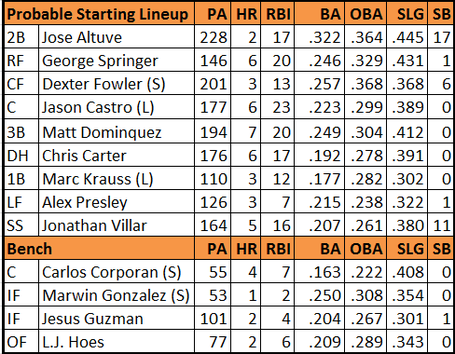 The Astros are quite terrible defensively according to fielding runs, with outfielders Dexter Fowler, Alex Presley and Springer serving as liabilities, although Crawfish Boxes challenges those numbers. The Astros employ dramatic defensive shifts, which they say has caused them to lead the league in "extra outs collected on defense."

Pitcher Scott Feldman was the Astros big free agent splash this past winter, and the groundball artist has paid off well thus far. Collin McHugh was a waiver wire pickup who has suddenly struck out over a hitter per inning in six starts thus far. The Royals will miss Dallas Keuchel, the 26-year old lefty who has been the Astros' best pitcher this year. 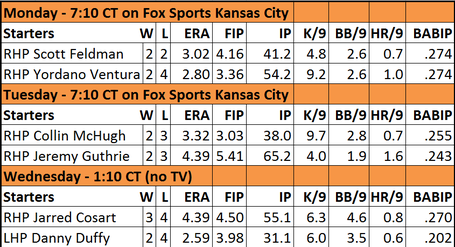 The Astros as a team are a better pitching team on the road, with a 4.02 ERA as opposed to a 4.99 ERA in the bandbox they play their home games in. The bullpen is a mess, with a league-worst 5.17 ERA, and nearly four walks per nine innings. Lefty-specialists Tony Sipp and Darin Downs have pitched well in limited action, but Jerome Williams and Josh Fields have struggled from the right side and the club recently picked up our old pal Professor Kyle Farnsworth to add some depth. Chad Qualls will probably see closer duties if the Royals are in that unfortunate position.