The Royals head north of the border to discover a world where teams hit the ball over that fence in the outfield. That wondrous feat is called a "home run."

After a big splash in the offseason, the Toronto Blue Jays fell flat on their face in 2013. They suffered a ton of injuries, had some awful years out of key players, and won just 74 games. So it should not be a surprise that once they are healthier, with players regressing back to the mean, the team is 32-22 with the second best record in the American League.

The Blue Jays provide a stark contrast in offensive philosophies to the Royals. While the Royals limp along with the worst-hitting home run team in the league, the Jays lead the league in home runs with 76. It has been beaten to death, but red-hot Jays slugger Edwin Encarnacion has more home runs this month (14) than the Royals have hit as a team (10). It shouldn't be surprising that while the Royals are dead last in runs scored, the Blue Jays are first, averaging nearly five runs per game.

Former Royals outfielder Melky Cabrera had a disastrous 2013 season, but he had a tumor removed from his lower back and has rebounded to have a terrific start this year. Jose Bautista has continued to be one of the most feared sluggers in the league and Edwin Encarnacion is slugging .743 in the month of May. Juan Francisco, released in spring training by the Brewers, is third on the club with nine home runs. Regular centerfielder Colby Rasmus is out with a hamstring injury, but Anthony Gose has played very well in his place. 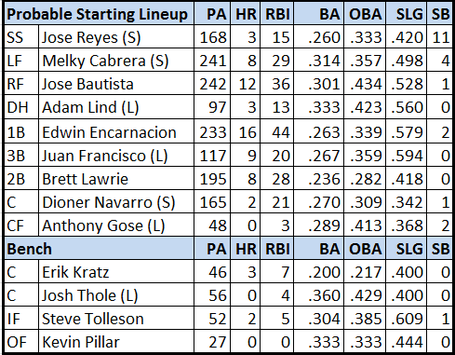 The Jays are ninth in the league in runs allowed and have been a much worse team in allowing runs at home than on the road with a home ERA of 4.52 compared to 3.76 on the road. The rotation - which was a mess in 2013 - has been solid in 2014, with Mark Buerhle off to one of the best starts in baseball. Closer Casey Janssen has yet to give up a run this year, although he has pitched just nine innings due to injury. The Jays bullpen overall has a .792 OPS against, the worst in the league, highlighted by this awful eight walk inning against the Twins. 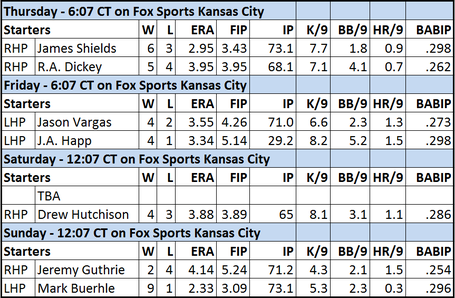 Omar Infante is expected to play just two games of this series due to the concern of how his back will respond to playing on artificial turf. The Royals have yet to announce a starter for Saturday's game, which would be Yordano Ventura's turn in the rotation. Bruce Chen is not expected to be healthy enough to return for that start. Omaha is scheduled to pitch Sugar Ray Marimon on Saturday, although calling him up would require a 40 man roster move. Marimon has been one of Omaha's best starterers with a 2.82 ERA and a 2.75 strikeout-to-walk ratio, but is not considered much of a prospect  John Lamb is scheduled to pitch tomorrow night, so its possible they could delay his start and call him up for Saturday. Lamb has a 4.59 ERA, but has struck out over a hitter per inning.