Alex Gordon and the narrative

An examination of Gordon's career in light of Moustakas' demotion.

Share All sharing options for: Alex Gordon and the narrative

It is a cool but refreshing night in the first month of the 2010 season—April 27, to be exact—as I walk into Kauffman Stadium for the first time that year.  A few friends and I, having won free tickets from some college event, locate our excellent seats behind the third base dugout and prepare for some baseball.  Zack Greinke was the starter, and he did not disappoint.  In typical Zack fashion, he confounded the opposing Mariners with his power fastball, hammer curve, and slicing slider. He struck out five while walking none over seven innings, giving up no runs.  The Royals only gave him two, but with Greinke and Joakim Soria, two is all you need.

It could have been more, of course.  In the 4th inning, tied 0-0, Jason Kendall walked and Alex Gordon came to the plate.  One wild pitch later and Kendall was in scoring position with nobody out.  A few pitches later, Gordon swung and missed, striking out.

Gordon was a giant disappointment.  The former first round pick who skipped AAA had hit .250/.331/.415/.746 in his 1361 plate appearances going into the 2010 season, 3% below league average.  He had played suspect if passable defense at third base, and was generally not the savior that everybody wanted and expected.  Knowing this, I shook my head, also disappointed at his strikeout.

However, a few rows in front of me, some guy holding a plastic cup with bubbly amber liquid was causing a slight stir.  He wore a Gordon shirsey on his back and was loudly retorting to his friends who were lamenting that Gordon sucked.  "You wait," he slurred.  "Mark my words.  Gordon will be great."  He was adamant about it, as if he knew something we didn’t.

I’m not sure why I remember that statement, but I did. In the 8th, Josh Rupe, Rob Tejada, and Bruce Chen imploded, gifting the Mariners three runs.  When Alex Gordon had a chance to tie the game in the bottom of the inning and flied out, I remembered that guy’s statement.  When Gordon was demoted to the minor leagues a few weeks later, I remembered it.  When Gordon made an error on his very first opportunity in the outfield with the Royals, I remembered it.

Now, the prophecy of that random inebriated man and/or time traveller has come true, according to the accepted narrative.  Except this narrative isn’t completely correct.

How the Royals screwed up the Moustakas demotion

The easy thing to do is to look at Mike Moustakas and compare him to Gordon, but that’s somewhat of a fallacy.  In many ways, they are eerily similar—both are left-handed hitters who throw right, both were third basemen, both first round picks, and both demoted in their fourth season in the big leagues.

However, both players are different enough that I’m not sure Gordon is a good comp for Moustakas.  In Gordon’s first four years, he had a .733 OPS and a 95 OPS+ in 1642 PA while generating most of his value from his average offensive output.  Moose’s healthy first four years are an offensive horror story: in 10 fewer PA, he had a .669 OPS, an 82 OPS+, and derived his entire value from good defense.

For a prospect that outright skipped AAA, the beginning of Gordon’s career was understandable.  His rookie year, he posted a low OBP but a solid slugging percentage leading to a 90 OPS+.  In his second year, he made a good step forward, increasing his average and walk rate while maintaining ISO and BABIP numbers at his rookie campaign levels, driving his OPS+ up to 109.

When looking back at the accepted narrative, it is uncomfortable to realize that Gordon was not actually a bust in his first two years.  In 2007-2008 over 1172 PA, Gordon posted a blandly average 99 OPS+.  Not good, no—but at or better than the offensive output of other homegrown Royals (over a similar amount of PA) such as Johnny Damon, Billy Butler, Carlos Beltran, Mike Sweeney, Eric Hosmer, and Mike Moustakas.  His 4.5 fWAR over that time period was also greater than every one of those names except for Beltran.  Gordon was not a bust... 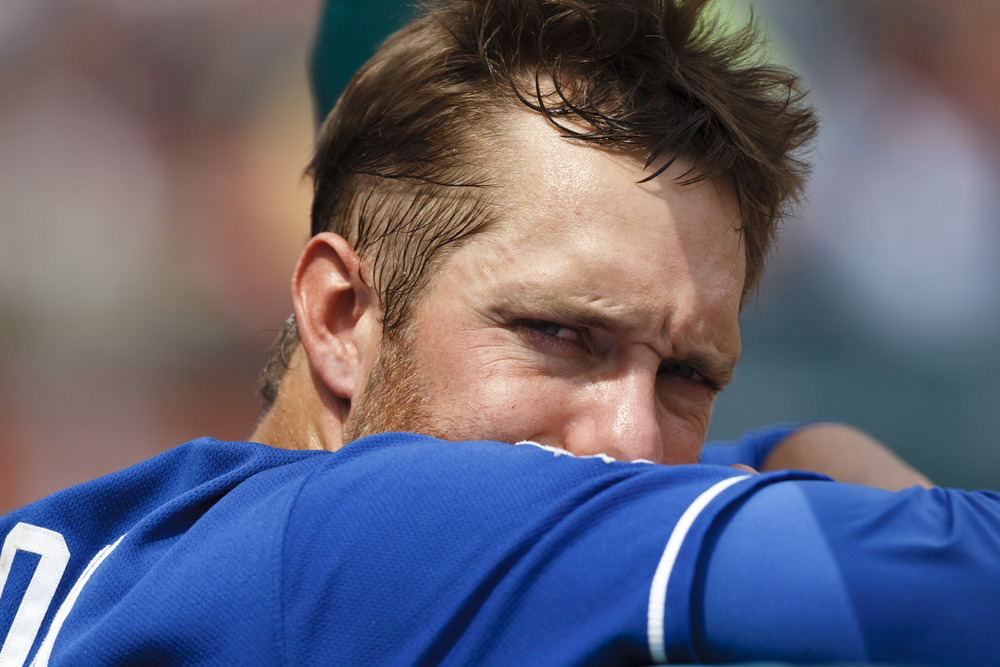 …but then came the injuries.  In 2009, Gordon tore his hip sliding into a base; he subsequently missed three months and only played in 49 games.  Offensively, he wasn’t much worse than his rookie season, and in a year with a major injury there would have not been too much hubbub about it except that Alex Gordon was supposed to be ALEX GORDON and not Alex Gordon.  Then next spring training he broke his thumb and his already short leash shortened.  His demotion to Omaha in May was viewed as an admission of failure by the Royals.  USA Today had this to say about the demotion:

The Kansas City Royals, who admittedly blew it by taking Alex Gordon with the No. 2 pick in the 2005 draft instead of several All-Stars, are hoping to now salvage their choice by moving Gordon to left field.
They demoted Gordon to Triple-A Omaha, and told him he will be moved from third base to the outfield.

The Royals, who bypassed All-Stars Ryan Braun, Ryan Zimmerman and Troy Tulowitzki in the draft, believe that Gordon's defensive deficiencies may be responsible for his offensive woes.

They were giving up.  Another star was rising—that star which belonged to Mike Moustakas who would go on to hit 36 home runs in the minors in 2010—and the Royals wanted to try something new.  Nothing else had gone right, except it did, but prospects are often viewed in a strange light, where success is sometimes failure and where failure is sometimes success.

Then, in 2011…well, we know what happened then.  So did Alex Gordon, before it happened, apparently.

Not that this year is over, but I’m going to dominate next year. I’ve shown flashes, but something that’s bothered me is I haven’t been consistent. I show flashes, and then I go into a little bit of a slump that kind of erases what I did. I just need to figure out how to be consistent and put it all together throughout the year.

All Gordon did was put together the best offensive season by a Royal in 9 years and the 11th best individual season fWAR by a position player in the history of Kansas City Royals baseball, winning a Gold Glove at his new position in the process.  He did, you might say, dominate.  He was ‘fixed’ by Dayton Moore’s brilliant move to send him down to Omaha and get him going again.  Nevermind that he was completely healthy for the first time in three years, or that he was 27 and in the sweet spot for offensive production.  The narrative says that he succeeded because he was cleansed of his broken status, when perhaps he was only cleansed of his broken bones.

Watching and following the Royals can take its toll on the best of us.

Of course his 2011 was amazing and out of nowhere, but in 2014 it sure looks like an outlier.  It was mostly fueled by an abnormally high BABIP of .358 and an inflated ISO of .200; his walk and strikeout numbers were consistent with career averages.  In 2012, Gordon’s .160 ISO joined his K and BB rate to be near his career averages, and although his BABIP remained the same, that was enough to drop him from 40% above league average to 23% above league average.  2013 and so far in 2014 have had everything regress to career averages, leading to a meager 103 OPS+ last year and a 107 OPS+ this year so far.

Maybe the Royals didn't make him a better hitter, but that doesn't mean that his demotion was a failure, as the opposite is true.  Gordon is an amazing fielder.  His decent speed is aided by his efficient routes to give him above average range, and he has a rocket on his right shoulder that is possibly the best arm of any outfielder in baseball today.  In moving him to left field, the Royals greatly improved his value.  A good hitter with iffy defense will net you 2-2.5 WAR a year, but an elite fielder will give you the 4 WAR player that Gordon has become.

It’s always difficult to draw concrete ‘what-if’ conclusions in baseball, but it seems that the bulk of Gordon’s value post-demotion came from a position change, added maturity/baseball experience, and consistent health.  It is impossible for Moustakas to do the same, because he already has good fielding and a mostly healthy career.  If the Moose is to be loose, he needs to blaze his own trail.  What that is, nobody really knows, perhaps not even him.

But maybe there was a fan at Kauffman stadium with a Moustakas jersey a month ago who defended him after yet another pop-up to third base.  "You wait," he says.  "Mark my words.  Moustakas will be great."

We’ve waited for Gordon and were pleasantly surprised.  Moustakas is not Gordon.