Royals regression to the mean

This club will improve its hitting, Dale Sveum or not.

Share All sharing options for: Royals regression to the mean

Through 52 games, the Royals offense was terrible. So they had to do something. Dale Sveum was made hitting coach, while Pedro Grifol was asked to move his desk to Storage B. Then - it clicked! The Royals scored eight runs, with their most extra base hits in a game since May 6 against San Diego, including a home run from Salvador Perez. What was this devilry practiced by Dale Sveum? Was he getting immediate results?

The fact is, the Royals have been underperforming so badly this year, that they are likely to improve no matter who was hitting coach the rest of the season.

While this was not projected to be a great, or even a good offense by any stretch, most projection systems did not peg the Royals to be this bad. Even under early CAIRO projections (which did not include Omar Infante and Nori Aoki), the Royals lineup projected to average 4.19 runs per game, rather than the putrid 3.87 runs per game they are currently averaging.

Career statistics, while not complete, can give us a better indication of true talent level than the small sample of a two month stretch. And based on career statistics, virtually the entire team is underperforming. Here is how the Royals hitters compare to their numbers coming into the season.

Here are their 2014 totals as expressed by the percentage difference from their career totals coming into 2014: 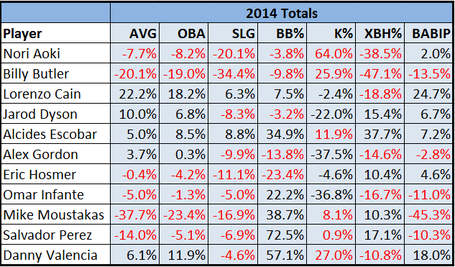 There is more red there than at a Cardinals game. If David Glass saw a spreadsheet like that from his Wal-Mart managers, heads would roll. Here, we get coaches re-assigned to cushy jobs.

The truth is though, the Royals could have hired an inanimate carbon rod to be their next hitting coach, and the effect would likely be the same. Anyone that knows a lick about baseball knows that Billy Butler is not a .238 hitter with virtually no power. Yea, he's fat, he hits into double plays, and he's likely having a career worst season. But he's not this bad, and players with his track record generally don't just fall off a cliff like this at his age. Billy will eventually start to hit. Trust the process.

I'm not discounting the possibility Dale Sveum can't help a few of these hitters out and that Grifol was having some sort of negative effect on the team. But more likely they are going through an epidemic slump that will be cured simply by playing out the string and regressing back to the mean. And if Dale Sveum wants to take credit for that, well lucky him.