Dayton Moore Totally Gets Why this Team is Losing

Relax guys, Dayton Moore is ON IT.

Share All sharing options for: Dayton Moore Totally Gets Why this Team is Losing

Are you frustrated with the Royals slow start? Well, rest assured because Royals General Manager Dayton Moore is even more frustrated as you as he told Fox Sports Kansas City's Jeffrey Flanagan. But fear not, because Dayton Moore is all over why this team is not performing up to snuff. 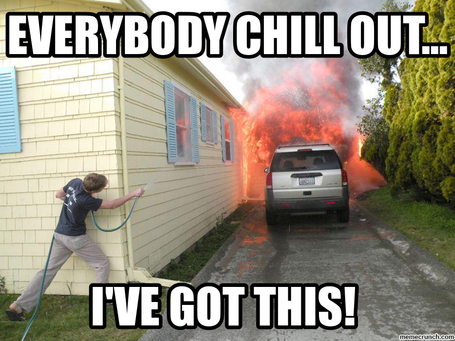 "I'm as frustrated as anyone," Moore told FOXSportsKansasCity.com by phone. "It's very simple why we're not winning as much as we should be -- we're getting plenty of base runners but just not driving them in.

And the stats bear this out. Going into last night's ballgame, the Royals had a team on-base percentage of .307. That's 13th out of 15 American League ballclubs. Eat it Houston and Seattle. The Royals are averaging 11.8 baserunners per game. The league average is 12.8. That's practically the same! Plenty of baserunners.

"(Monday) was another example. What did we have, 19 base runners? That's a game we dominated but couldn't get enough runs home. Our ability to get runs home has to improve. Period."

"It's quite simple for us. We need to be having our best at-bats when it matters most, when runners are in scoring position, and that's not happening now."

The Royals are hitting just .241 with runners in scoring position. With two outs and RISP, the number is even more grim -- .211.

See! They're just not being clutch. And clutch is what matters when scoring runs. It doesn't matter that the Angels are even worse (.221) with RISP but are somehow second in the league in runs scored. That's because they have high priced big boppers! (um, please don't mention the Twins who are also worse, but are fourth in runs scored).

And .211, that's awful! I mean, only five teams are worse, including the Twins and Blue Jays, both of whom are below the Mendoza Line in similar situations, yet are in the top five in runs scored. The answer is clear - GET MORE CLUTCHER! 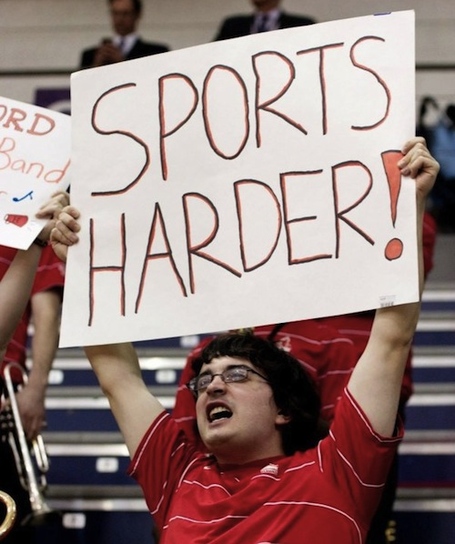 Dayton ponders what his options are:

A trade seems unlikely at this point.

"There's not a lot you can do because there aren't a lot of players available (for a trade) right now," Moore said. "And I still have a lot of faith in the guys we have."

Its not like there is a clutch hitter tree.

"It's the players who have to be accountable," Moore said. "And they are and they will be.

Yes, the players! Accountability is important to players! NO ONE ELSE.

"That's the time when, as a group, you have to concentrate and come up with your best at-bat," Moore said. "I get that we want to be aggressive and make things happen. But you also have to be selective and wait for your pitch to do some damage. That's not happening right now."

Yes, the man that acquired Tony Pena Jr. and Jose Guillen and Yuniesky Betancourt and Mike Jacobs and Jeff Francoeur and has never assembled a team that has finished higher than ninth in the league in walks wants the players he has assembled to be selective!

One area that likely will change immediately is the Royals' penchant for hacking at 3-0 pitches. The Royals now have swung at six 3-0 pitches and have just one hit, a seeing-eye single by Nori Aoki. The five other swings actually have resulted in six outs -- one swing produced a double play.

"The results of that are unacceptable," Moore said firmly. "That (situation) has been addressed. Pedro and Ned understand that."

Its funny that either this was either (a) not addressed before the season; or (b) six at-bats have changed their philosophy. Did I say funny? I meant, its really, really smart!

Another area where Moore wants to see improvement is the team's pattern of swinging at pitches out of the zone. The Royals, according to FanGraphs, swing at an above-average rate (30.4 percent) of pitches outside the zone, which is never a good idea for a team that is last in the league in homers (13) and has a woeful .307 on-base percentage (13th out of 15 AL teams).

"That has been addressed, too," Moore said. "Pedro and Ned are working with the hitters every day on their approach, whether it's being ahead in the count, having two strikes on you, or whatever.

"But sure, we know it has to get better. I still believe this group of guys will hit."

You don't have Frenchy to kick around anymore. This is all on you guys.

"We're just not there right now," he said. "This is not the start we expected. If you look at the whole, we're getting very good starting pitching. (James) Shields and (Jason) Vargas had a couple of rough starts over the weekend, but that's normal regression. It will build back up.

You see, Shields and Vargas getting battered by a superior Tigers lineup over the weekend was normal regression. They will both build back up to the sub-2.00 ERAs they showed their first five starts. Its called riding a hot hand, ask any good gambler!

As for the team's rough 0-5 start in May and any comparisons to the 8-20 May from a year ago, Moore said: "We're just not playing well right now. It has nothing to do with the calendar. But we need to start getting some wins right now.

Yes, wins right now, or else management players will be held accountable!

If that doesn't reassure you, let's look back at what Dayton told us last winter.

"I've never said that this is the year we're going to be in the playoffs. I don't make any predictions like that... But without a doubt, this team in 2014 is one I expect to be able to compete from the first day to the last day."

See? This team is competing. Feel better? Dayton's got this, guys. I think we can trust the guy who's led us to 70+ wins in four of our last six seasons. And if you don't trust him, Trust the Process.