Real or not, it sure seems like Danny Duffy spends a lot of time pitching with two strikes.

Share All sharing options for: Danny Duffy and Two Strikes

The Royals are sending Danny Duffy back out to start tonight against Seattle.  I am always up for a Duffy start because the guy has genuinely good stuff.  Control?  Problematical, but the stuff is just fun to watch fly up there.  It is the kind of arsenal that always makes you think that Duffy 'should be/could be/boy it would be fun if he was' a front of the rotation kind of starter.

It has yet to turn out that way.

We only need to look at the first inning of his first start of the year against Detroit last Saturday to get an example of a classic 'Duffy' inning:

Tantalizing stuff, but 11 total pitches thrown to three batters AFTER getting two strikes on them.
Now, after the first inning, Duffy got to two strikes on six batters over the next three innings and used just 11 pitches total after getting that second strike.   Obviously it doesn't all boil down to Danny not being able to dispatch hitters with two strikes, but it is something that he periodically seems to struggle with.  Is it nibbling?  Is his stuff not quite good enough (that's hard to believe, but possible)?
Or is it all just a case of perception versus reality?  I can tell you that I started a similar column at one point last season and, on a percentage basis, Duffy was not really throwing a huge amount more two strike pitches on a percentage basis overall than James Shields or Ervin Santana.   Full disclaimer, that was some fuzzy math and fuzzy recall at work, so feel free to check and contradict.
Anyway, as we prepare for tonight, I'll leave these two strike charts (from the catcher's perspective and courtesy of Brooks Baseball).
Raw pitch count and location with two strikes: 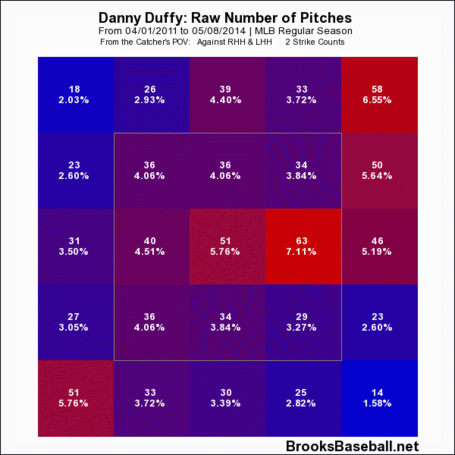 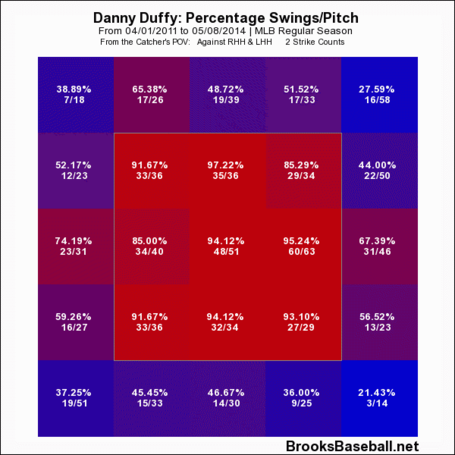 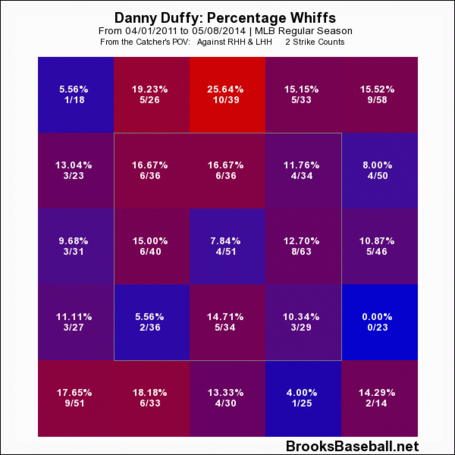 And finally batting average of opposing hitters by location with two strikes: 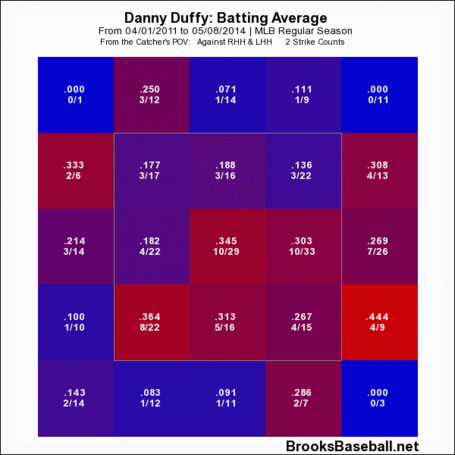 Make of them what you will.  Game thread will be up about eight o'clock tonight.  Everyone take a nap so you can enjoy the fun from Seattle.