Indians Series Preview: .500 is so close

A good series vault us into second place. A bad series drops us to last. Such is life in the mediocre Central Division.

Share All sharing options for: Indians Series Preview: .500 is so close

The Central Division has been a beacon of mediocrity in the American League this season, with only five games separating first place from last. The Royals will get a chance to separate themselves from their mediocre brothers, as their next nine games are all against division foes. Tonight they'll start (hopefully, if the weather cooperates) a quick two-game set against the boys from Cleveland.

Cleveland has been on a tear, having won nine of their last ten, including two walkoff victories. Carrying the team has been Lonnie Chisenhall, the once-disappointing first round pick who has been owning the league this year. Chisenhall is hitting an insane .452 this month with 4 HR 17 RBI in just eight games, including a 5-5, 3 HR 9 RBI performance last night. Its the kind of season we hope Mike Moustakas would have when he turned the corner. Alas, Moose ran into a wall.

The Indians are a club based on offense, sitting at fourth in the league in runs scored. They are a fairly balanced team - 2nd in on-base percentage, 7th in slugging percentage, 8th in home runs, and 6th in stolen bases. They've endured disappointing seasons from Carlos Santana and Nick Swisher and injuries to Michael Bourn and Jason Kipnis by having terrific seasons from Chisenhall and Michael Brantley. The Indians have seven regulars or semi-regulars who sport an OPS+ over 100. 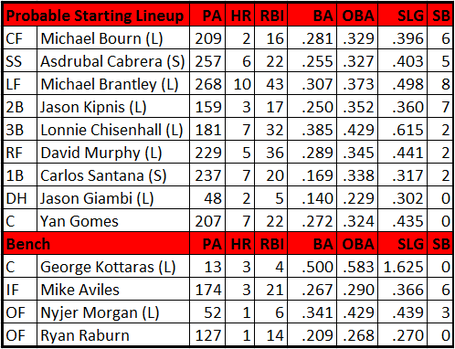 The Indians mix and match different lineups a lot, so things could change. Mike Aviles is battling a toe injury, but if he his healthy, he may slide into third base, moving Chisenhall to first base, Santana to DH, and Giambi to the bench. Indians designated bro Nick Swisher is out with a left-knee injury. As you will notice, former Royals Mike Aviles and George Kottaras - both part-timers - would each be fourth on the Royals in home runs.

The Indians staring pitching has been a bit disappointing, but the Royals will face Cleveland's two best arms this season in Corey Kluber and Trevor Bauer. Cleveland leads the league in strikeouts, and both Kluber and Bauer each strike out over ten hitters per nine innings.

The back of the bullpen has had some turnover with Cody Allen assuming closer duties from John Axford. But overall, the Indians pen has  3.05 ERA, fourth in the league. The pen is a hodge-podge of arms picked up from other organizations. Along with Allen and Axford, right-hander Brian Shaw will pitch in late innings, with Marc Rzepczynski, Josh Outman, and Nick Hagadone pitching from the left side.