A Look at Possible Royal All-Stars

With the All-Star Game a month away, who will be the Royals' representative(s)? Spoiler: probably not Mike Moustakas.

Share All sharing options for: A Look at Possible Royal All-Stars

The last few All-Star games for the Royals have been quite eventful.  In 2012, the venerable game of greats was played in the Royals' own Kauffman Stadium, where Billy Butler, in the midst of a great season, was the Royals' lone All-Star.  However, the atmosphere, chanting, and booing of Cano made it a great game and experience.  In 2013, the Royals had three All-Stars--eventual Gold Glovers Alex Gordon and Salvador Perez along with Greg Holland.

Unfortunately, before 2012, the Royals have not had a great time with the All-Star game.  Until Perez's single last year, the previous Royal to get a hit was Bo Jackson in 1989, when the original Nintendo Entertainment System was all the rage and if you said 'Playstation' people would give you weird looks.  Sure, pitchers had played before, some even succeeding, but then you have Mark Redman in 2006 (whose ERA at the time was over 5 and who in June had an ERA of over 6) and, um, Aaron Crow in 2011 to dismantle the facade of integrity so precipitously held up by the Royals organization.

Of course, the All-Star Game's selection rules are not exactly simple, so let's go over the rules here before we get to the meat and cheese of the article. 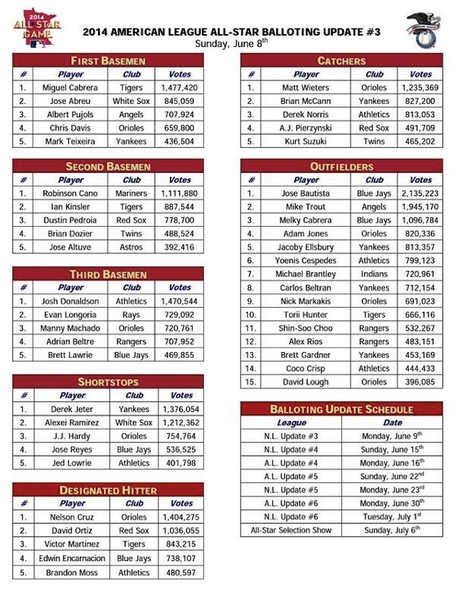 Yes, that is 40-year old Derek Jeter and his 0.1 fWAR leading all shortstops and, no, there are no Royals on that list of 45 players.  No Royal has been voted by the fans to start the All-Star game since Jermaine Dye in 2000.  This could be due to the fact that the Royals have practically no national relevancy, or it could be because people assume all Royals players suck just because (big, if true).

However, the Royals have a number of players who are definitely worthy, so I'll profile 6 of them and discuss their chances.

From most to least likely:

There are three reasons why Holland is a sure-fire lock for the All-Star Game.  One is that managers favor pitchers over hitters.  Since the starter usually only goes 2 innings, you need a minimum of 8 pitchers to actually pitch in the game, more if you put in some for a partial inning.  The AL used 10 pitchers last year, for instance, and more good pitchers usually means a better chance of winning.  The second reason is that Greg Holland is not merely a mortal reliever, but a CLOSER.  With 47 saves last year, Holland is leading the AL in saves so far this year with 18.

The final reason is that Greg Holland is absurdly good at his job.  Between 2012 and 2014, Holland is second among all relievers in fWAR and is one of only three to post a K/9 north of 13.00 while having an ERA south of 2.00.  The man is ridiculous.

Gordon was voted by the players/coaches last year, which shows that the league respects him (when they don't respect him, he guns them down at the plate and hangs a Husker's flag outside of their hotel room).  Already being an All-Star helps, as sometimes I feel the All-Star Game is nothing more than a respectability and/or popularity contest.

Other than that, Gordon is having an insane season so far.  He's hitting .288/.376/.445, good for 30% above league average, is a total lock for his 4th consecutive Gold Glove, and is on pace for 6.0 fWAR.  Even if the players don't vote for him, he has been more valuable than every other outfielder in the AL not named Jose Bautista or Mike Trout and, at the very least, would be an amazing defensive replacement.

No, he's not a CLOSER.  But he's been better than Greg Holland, which is unbelievable, and everything I said about how managers love good pitchers stands.

All-Star teams almost always have three catchers, leaving two spots to vote by the players/managers/coaches and the manager of the game itself.  Perez, again, has a fantastic reputation around the league.  If you listen to people not from the Royals talk about him, it's almost as if they're talking about the Mariano Revera of catching.  Seriously--next time you hear a different broadcast or another player say something, try to pick out something negative.  You can't.

The only reason why Perez isn't higher is because a couple of other catchers are having very good years.  Yan Gomes, Derrick Norris, Chris Iannetta, and John Jaso are all hitting better than Perez is at the moment and Wieters seems to be the surefire vote by the fans, leaving only two spots.  Still, Perez's value as defensive replacement is high.

Shields is one of those pitchers with a great reputation.  He's a workhorse, he's a good clubhouse guy, his last name is Shields which is pretty awesome, etc.

Unfortunately for Jamesy, there are 18 other starters with a better ERA than him, 15 with more wins, 18 with a higher K rate, and 17 with a higher fWAR.  By either traditional or sabermetric, Shields lags behind.  However, he could still get picked, as players don't look up pitchers on Fangraphs like I did to see their stats.  Also, depending on injuries ahead of him, his chances could improve.

We're sort of reaching at straws here, but Cain is probably the last guy the Royals could have, best case scenario, at the All-Star Game.  Cain is having a deceivingly fantastic offensive campaign fueled by the BABIP fairy to the tune of a wRC+ of 124.  He is, of course, an elite defender, which is where most of his value comes from.  To that end, adding in the fact that he can play all three outfield positions, he could make sense as a defensive replacement if he continues his good hitting for the next few weeks.  However, it's hard to see that happening.

My final prediction is three All-Stars--Holland, Gordon, and Davis, specifically, but any three out of the top four makes a lot of sense within the context of the All-Star Game and recent history.

The realistic best-case scenario is the Royals getting all four of the Holland/Gordon/Davis/Perez combo, which could definitely happen, but chances are something comes up for at least one of them.

Things could also change seeing as we are weeks out from the decision--a particularly hot run by Shields or Ventura could tip the scales in their favor--but we are running out of time for some crazy pre-Minnesota antics.