Share All sharing options for: Revisiting the Norichika Aoki trade

Everyone liked the Aoki-Smith trade for the Royals.

Personally, I loved it if that means anything to you. You probably did too. And in theory, the trade still holds up, but life is immune to theory. After all, theory is just the often-flawed, ever-evolving human understanding of a thing, not what that thing really is. In other words, the trade still makes sense, but of the infinite number of possible outcomes pinging around in potentiality, a very fitting, Royalsian conclusion is the one that wriggled its way into reality.

Aoki is hitting .256/.318/.311. Zero homers, of course. And he's been pretty terrible in the field as well. He's tied for second-worst in baseball with David Murphy at -9 defensive runs saved (for right fielders). His range is passable (UZR/150 of 7.6, seventh in MLB among right fielders), but overall, he's been pretty disappointing. 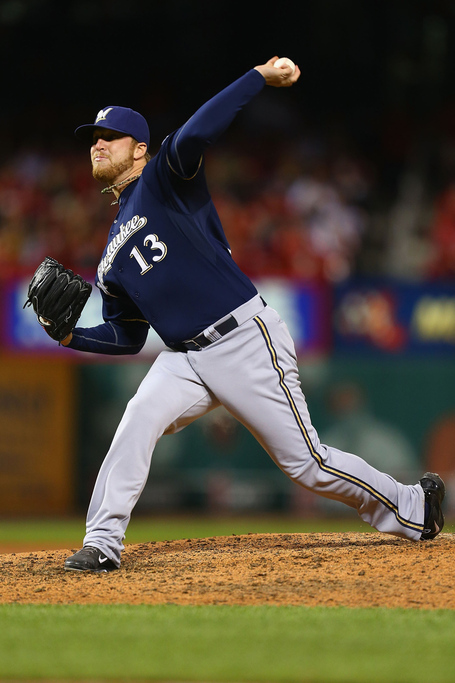 The obvious response after eight years of Dayton Moore is: Well, what did you expect to happen? Something good?

Even when he makes a decent trade, this is what comes of it. And yeah, it's a small sample size for both players, but Aoki will only be on this team for another couple of months, so the sample is what it is.

Of course, it wasn't likely that Smith would pitch this well or that Aoki would play this poorly. Their 2014 seasons aren't lining up well with their track records. Obviously, this isn't a metaphysical censure from the mercurial gods of Baseball Mountain. There is no curse. Just kind of a bummer.

Aoki probably shouldn't even be playing regularly right now. Jarrod Dyson has been more than a full win better than Aoki, and if you don't like WAR, consider the fact that Dyson is making outs less often than Aoki, stealing bases more often, and playing elite defense in center. With Gordon, Dyson, and Cain in the outfield, the Royals' outfield defense might be one of the best in the last decade, maybe longer. All three rank in the top ten in UZR/150 and DRS -- Dyson's UZR/150 is 70.3!

It's extremely unfortunate that the Aoki trade has worked out this way so far, but there's a really simple solution to the problem sitting on the bench every night.

If Yost is worried he'd be hurting Dayton's reputation by benching Aoki for Dyson, maybe he should just ignore the media that's always so mean to both of them and make the obvious call. Maybe Dyson can't put up the same numbers as a regular, but he deserves a chance to prove himself one way or the other. Besides, pretty much everyone agrees that the trade was a good idea at the time, it just hasn't worked out. Time to adjust.

If it's a matter of value, Nori Aoki has already been extremely worthwhile for the Royals photographically.