A good series, a Tiger stumble and it could happen!

The Royals enter this weekend in second place, just 2.5 games back of first place Detroit in a division where only four games separate first place from last. The MLB schedule pits Central Division foes against each other this weekend, with the Royals heading to Chicago, and the first place Tigers hosting the Kendrys Morales-added Twins. A great weekend could catapult the Royals into first place. A bad weekend probably doesn't change things much. Win-win!

The White Sox came into this year looking at a rebuilding season, but they have been a very stable .500 team, just a game behind the Royals. They have an offense that scores the fifth most runs in the league at 4.45 runs per game, to the Royals' 3.95. Leading the offense has been rookie sensation and Cuban import Jose Abreu, who has blasted 19 home runs, good for third in the league. The White Sox as a club are fifth in the league in home runs, with Adam Dunn and Alexei Ramirez also providing pop. They still have a "grip-it-and-rip-it" approach, as they lead the league in strikeouts by a wide margin , with 230 more strikeouts than Royals hitters. 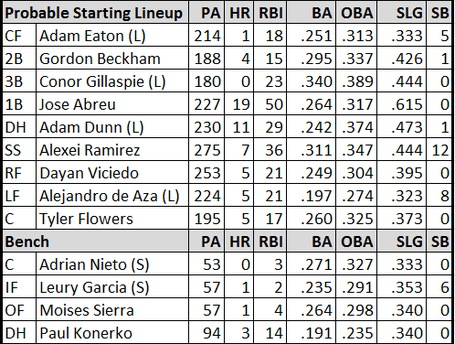 The White Sox aren't particularly adept at getting base - they're ninth in on-base percentage and ninth in walks. Gillaspie is a Wichita State product who was quietly acquired from the Giants last year and has been on fire this season, although he has a .399 BABIP and little pop to speak of. Long-time veteran Paul Konerko, who has terrorized Royals pitchers in the past, is little more than a bat off the bench and clubhouse presence at this point in his career.

The White Sox pitching staff has struggled, particularly the rotation. They are second-to-last in ERA, and their starters have the second worst ERA among all league starters. They'll actually put out a good one on Friday night in Jose Quintana, but Saturday's starter was claimed off waivers a few weeks ago, and Andre Rienzo is a 26 year old Brazilian with unimpressive minor league numbers. 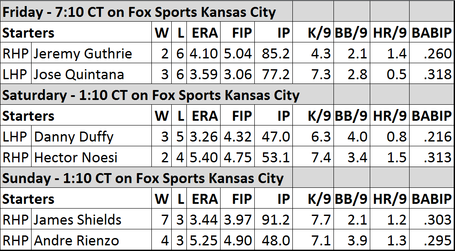 White Sox relievers have fared better in the ERA department, but they are dead last in the league in strikeouts per nine innings for relievers and strikeout-to-walk ratio. Ronald Belisario has taken over closer duties, but is six-out-of-nine in save opportunities and has flirted with disaster a few times. Rookies Daniel Webb and Jake Petricka have good ERAs but have been very wild. Veteran left-hander Scott Downs has also been very wild, although still tough on lefties with a .539 OPS against. Reliever Matt Lindstrom is out with injury, leaving the rest of the pen to anonymous names like Javy Guerra and Zach Putnam.

First place is within striking distance. Get excited.