Tigers Series Preview: This is kind of a big deal

Take a deep breath. This is a big series.

Share All sharing options for: Tigers Series Preview: This is kind of a big deal

Are you ready to have some fun?

The Royals, who looked dead in the water about two weeks ago, have gone on a run to win twelve of their last sixteen ballgames to take sole possession of the final Wild Card spot. Now, at just 1.5 games back of first place Detroit, they have a chance to take over the division lead as they face off against the Tigers for a crucial for game series. The Royals are 0-5 against the Tigers, being outscored 32-12 this year, so a good series could at least be very symbolic for a young Royals team.

The Tigers got off to a sensational start this year, but have been struggling lately, dropping nine of their last fourteen, with a record of 9-17 since May 18. The once offensive juggernaut is just seventh in the league in runs scored, with a scant supporting cast surrounding two-time MVP Miguel Cabrera. Cabrera, for his part, is still having a very good season, but not an OMG MIGUEL CABRERA!-type season. His current .930 OPS would actually be his lowest performance since 2008 if you can believe that. He has been overshadowed by Victor Martinez, who leads the league in OPS, is second in batting average and slugging, and has slammed 17 home runs already this year. Aside from those two, the Tigers have just three players with an OPS+ over 100 - former All-Star second baseman Ian Kinsler, obtained in a trade from the Rangers last winter, outfielder J.D. Martinez, picked up after being released from Houston just before the season, and shortstop Eugenio Suarez, who was just promoted from the minor leagues a few weeks ago. 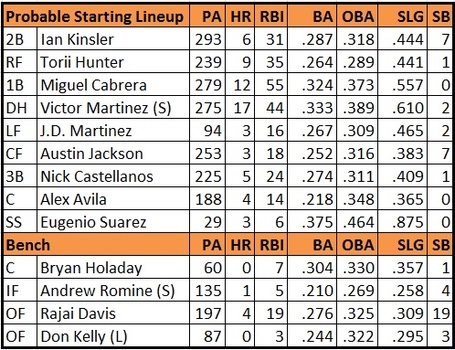 The Tigers are a very right-handed heavy lineup, but have actually hit slightly better against right-handed pitchers this year. Victor Martinez, the lone dangerous left-hander, has terrorized southpaws this year with a 1.226 OPS. And don't sleep on Don Kelly. 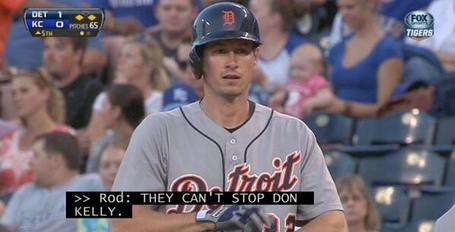 The Tigers are ninth in runs allowed per game at 4.37. The are the second best-team at suppressing home runs and Thursday's starter Anibal Sanchez has given up just one home run in eleven starts. Much has been made about Justin Verlander's off year, but his FIP is still better than the Royals pitcher he is opposing tonight - Jason Vargas. Verlander's strikeout rate is waaaay down however, and his walk rate is up, so if the Royals are simply able to put the ball in play, they could be in good shape. The Tigers defense is improved, but is still one of the worst defenses in the league.

Detroit's bullpen has been awful this year, with the worst ERA in the league, and the second worst OPS against. Free agent closer Joe Nathan has been a disaster, with a 6.85 ERA and six outings this year where he has allowed two runs or more (Greg Holland only has fourteen such outings in his entire career). He is still the anointed closer, although you may see Joba Chamberlain or Al Alburquerque in with the game on the line. Neither Ian Krol nor Phil Coke have been particularly tough on lefties this year, so the Royals shouldn't be too vulnerable against the southpaw specialists.

We may look back at this as the series that catapulted the Royals into a decade-long dynasty. Or the beginning of the end of the Dayton Moore era. Or it may just be a random June series. Who knows? Its baseball.