Royals seize first place from Scherzer and the Tigers

For the second straight night the Royals offense jumps all over Detroit, this time tacking 10 earned runs against Max Scherzer in four innings. Royals roll to victory (and first place) 11 - 4.

Share All sharing options for: Royals seize first place from Scherzer and the Tigers

The Kansas City Royals are in first place.

The first time I ever wrote anything about the Royals was in July of 2007. I honestly cannot recall ever getting to write those words past the middle of May. May 15th, 2009, in fact.

It's June 17th. Five years after the scars of 18 - 11. The last time the Royals were in first place past May 15th was in 2003. In 1997, they held first place as late as May 18th. Other than 2003, you have to go all the way back to 1993 to find a time in which the Royals found themselves in first later than this. That was George Brett's last season. Ewing Kauffman was still alive the second-to-last time the Royals could say they were in first past May 18th.

Maybe this nine-game winning streak and the 38 - 32 record becomes another notch on the headboard that looms over our collective nightmarish sleep state that we've been inexplicably punished with for the past 20 years. Today, however, we can look at what the Royals have done since being shut down by Cy Whitley two Fridays ago, and shake our heads in befuddled disbelief.

The Royals embarrassed Max Scherzer. This is the same Max Scherzer that won the Cy Young last year. No, there aren't two of them.

Scherzer threw 50 pitches in the second inning tonight. That's not a misprint. The Royals batted around and then some, racking up seven earned runs in that inning alone. Alex Gordon hung a majestic dong to get things started after Billy Butler doubled to lead things off. The thing about Gordon's dong is that it actually felt like it was coming. Right now, it feels like things should be going the Royals' way.

Two batters later, Mike Moustakas hung his own dong--again of the two-run variety--down the line in right. Again, it felt like it was sort of inevitable before it even happened. Eight Royals came to the plate and got on base before Scherzer recorded his first out in the second.

The crazier thing is that the Royals did a whole lot of things that would have cost them games a mere three weeks ago.

Ventura did some of that to himself, too. In the fifth, Ventura issued a bases-loaded walk to Miguel Cabrera. While facing the next batter, Victor Martinez, Ventura uncorked a wild pitch that flew to the backstop. Eugenio Suarez started to break for home. But because everything's coming up Milhouse Royals the ball kicked directly back to Salvador Perez, and he gunned down Suarez at third.

Don't believe everything's coming up Royals? Norichika Aoki came up lame after scoring a run in the second. His defensive replacement Lorenzo Cain did this in the bottom of the fourth:

Ventura worked his way around eight hits and two walks, striking out four in his seven innings of work. He was effective, if short of dominant. When the Royals drop an eleven-spot for the second straight night, Ventura simply needs to be serviceable.

The Royals offense combined for 15 hits, four walks, two home runs, and 11 runs scored. The only Royals who didn't join the hit parade was Eric Hosmer, who went 0-for-5.

The Royals are in first place.

Writing that sentence doesn't even really seem possible yet. 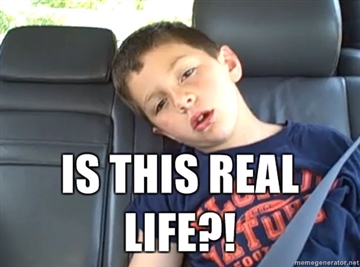