We know that the Royals make a lot of contact. How do they rank historically?

As the rate of strikeouts in the MLB has increased, the Royals have bucked the trend by making lots of contact. The problems with this strategy as employed by the Royals have been documented. I'll skip the long of it and give you the short of it: the Royals are really good at making contact with pitches out of the zone, which leads to easy outs on balls in play.

Place your attention on the wRC+ column. See the Royals' number. Be disappointed. The Royals have a 90 wRC+. Of the teams who strike out so little, this 2014 Royals team has the worst offense. To find the first team with a wRC+ below 90, I had to go down several rows to the....2000 Royals, who had an 89 wRC+ and struck out about 20.6% less than league average, which ranked 23rd. 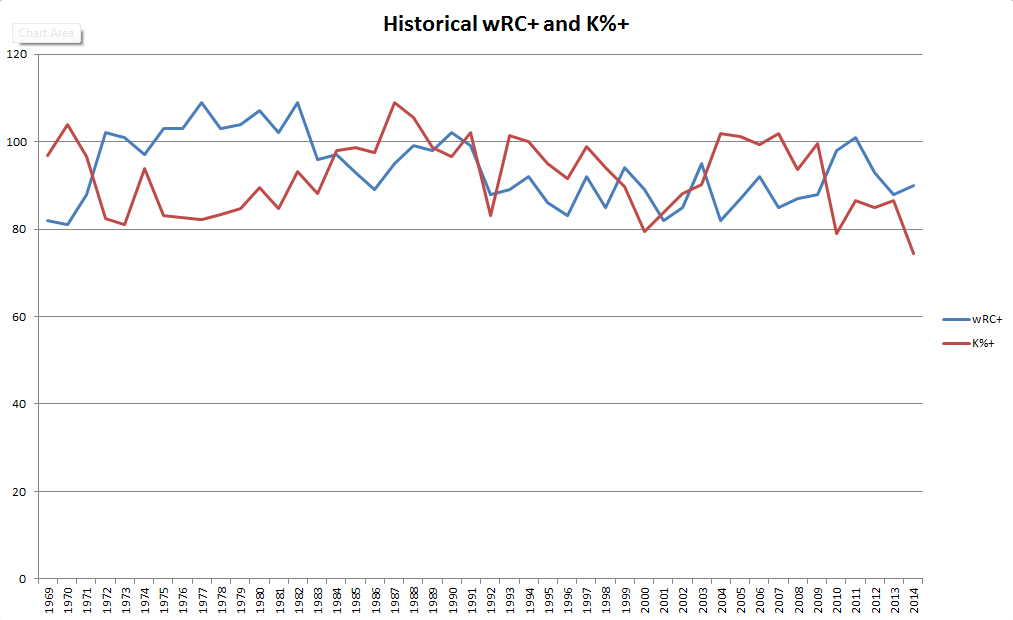 To be fair, this analysis has changed as the Royals have accumulated more games under Lord Sveum's tutelage. When I first gathered data, the Royals were at an 81 wRC+. The next iteration had them at an 84 wRC+. They are now at the totally arbitrary but magical cutoff of 90 wRC+. It's fun how much things can change in a hot streak. We're in first place now, and stuff. Their relative suckitude is getting better as the season rolls along, but the larger point still stands.

It seems that some sort of organizational philosophy has pervaded through ownership, GMs, coaches, eras, and decades. Only in the late 70s did the Royals consistently produce an above average offense while striking out less than league average. The Royals are still trying to live in the time of disco. Not this disco. This disco.

All data courtesy of FanGraphs.