Share All sharing options for: Royals Rumblings - News for June 19, 2014

Joe Posnanski says the Royals' success is bringing us back to the future. GREAT SCOTT!

So, yes, the Royals’ season was playing out like normal, the longest running tragic opera in America. You would have to say that, the Royals actually were AHEAD of their usual pace — hey, three games under .500 in June is almost parade-worthy in Kansas City. But it felt worse than normal because the Royals had been pointing to 2014 for a long time. This was to be the year it all turned around, the year their almost unprecedented crop of prospects blossomed, the year the Royals finally gave Kansas City a real pennant race to enjoy and endure.

Eleven days ago, that seemed impossible.

Today, at least, it not only seems possible but very real.

Yes: The wonder of baseball. The Royals have had brief moments of sunshine before –particularly back in 2003 when Tony Pena was handing out "We Believe!" T-shirts and the late Jose Lima was floating change-ups past the world. The Royals were in first place into late July that year. But it was different – 2003 was this strange oasis between 100-loss seasons. That team wasn’t any good, and everyone knew it wasn’t any good. The season was spent waiting to see how long it took the players to figure it out (answer: September 1). But this Royals teams IS good, or at least they have some good young players.

Jon Heyman writes the Royals can actually win the division.

The biggest question is whether the Royals can supplant the Tigers. And while that isn't going to be easy, Detroit has had a very unfortunate spring training, which has left it with some serious questions, including one at shortstop, so the Royals and Indians have their best chance in years to surpass the perennial class of the division. By my estimation, there's a chance both do. I'll take the Royals to win the division, the Indians to finish second and the Tigers third.

Last night's #Royals game at Detroit drew a 9.1 Nielsen rating, the highest-rated game of the season on FSKC.

Dayton Moore acknowledges that while the winning is nice, the team hasn't won anything yet.

"We haven't accomplished anything yet," Moore told me by phone Tuesday night. "Lots of teams go through runs for two or three weeks. You have to sustain it for a while and then you have to win games where you might not be hitting well. That's what good teams do.

"Look, I appreciate what we have been doing. I appreciate it because I know the history, and I know the times in the past where we weren't competitive. So this is good. "But like I said, it's June, and we haven't accomplished anything yet. We have to keep playing hard."

In a small way, they haven't won the World Series.

Sam Mellinger thinks thinks that even after this hot streak is over, the Royals' success can be sustainable:

So, obviously, this isn’t going to keep up. But the thing is, the Royals don’t need to lead the league in scoring to be a playoff team. They just need to be average, or even close to it.

Jonathan Bernhardt looks at how the Royals go so good, and argues they should look to acquire Chase Headley, Alexis Rios, and lock up James Shields to a long-term deal.

Being in first place by half a game in mid-June may not mean a whole lot to some, but it's time to see if the team Kansas City spent so much time and effort putting together can get to October from here. The Royals have the best group of pitchers in the American League outside of Oakland and the AL Central is wide-open space. Slap a tire patch on third base, find one more bat you trust, and go.

The Royals have scored the most runs in the league since Dale Sveum became hitting coach, attracting the attention of Peter Gammons Daily.

Even Denny Matthews is buying in.

"The Royals are playing very loose. I mean this in a good way – The Royals are playing like a bunch of wet noodles! … They’re playing flawlessly, really! Defensively, pitching – everything is clicking. When you’re playing this way – and I was being facetious when I said, ‘Will they ever lose again?’ – but that’s the appearance that they give, that they’re never going to lose."

If anyone deserves a fun year, its the man who had to sit and broadcast year after year of 100-loss seasons. Let's win one for Denny.

Re-live that glorious second inning on Tuesday night against Max Scherzer with Fangraphs. It took 51 pitches and over half an hour.

Over a 30-minute second inning, the Royals handed Max Scherzer his ass and put themselves in position to coast into first place. As of right now, we still project the Tigers to win the division two-thirds of the time, with the Royals and Indians combining for the rest. Most people around here are familiar with the value of the projections, but I suspect many of them hold different odds in their heads. It could be, that’s being too easily biased by recent events. It could be, it’s not that.

The Royals are real rock and rollers now - even Rolling Stone magazine has taken notice. 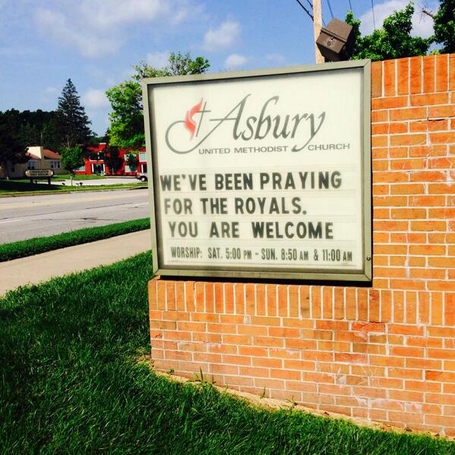 A positively fascinating piece about effective velocity, a theory that should be changing the way baseballs are thrown but isn't yet.

How much would it cost to change the Washington Redskins name?

The Onion Knight spotted at the World Cup!

Grantland's Andy Greenwald writes the internet has a "Louie" problem.

Pitbull is very proud about his fake degree from a not-that-real college.

Your song of the day is "How You Like Me Now" by The Heavy.