I don't know how to do this

Once every decade or so Royals fans have to reconcile with something called "satisfaction."

Share All sharing options for: I don't know how to do this

If you've been to a game recently at Kauffman Stadium, you might have seen a person hurling himself down that hill into the parking lot and sprinting back up to the top to do it over and over again. That was me.

I know it's a little weird, but I don't really know what to do with myself. The only way I have ever responded to things even remotely related to the Royals is with cynicism and sarcasm or by throttling my television while hysterically rage-whispering vitriol at the organization so terrifying it later manifests itself in my nightmares.

Now, they're good. They aren't great, but they're a good team that does things that are good.

See? I don't know how to do this. My Royals fandom is split into two halves. The negative half is about 20 years old and likes to make smart ass comments during the game, but the positive half -- including the fuzzy beginning in the 90s -- is about four years old. In other words, when the team does well, I function like a four year-old -- which is great, but it doesn't exactly lend itself to readable articles.

EXAMPLE: The Ryals our good today .  I am hapey now  there good and hiting the ball. i Like all the players and my favrut plays  are good toady.

Garbage, I know. So I thought maybe it would help me -- and perhaps a few of you that are experiencing the same confusion -- if we sort of reversed the stages of grief (actually called the Kübler-Ross model) in an effort to understand the passing of our negative selves. It's a little cliché, but it should suffice for a bunch of hapey four year-olds.

They'll screw it up. They always do.

It'd be easy to get stuck at this stage. After all, the Royals haven't actually proven anything yet. On the other hand, it's been 20 years since the Royals have won 10 games in a row and more than a decade since the last time they were in first place, so if you're still dedicated to being a bummer right now, you might be doing it wrong. Even if they don't make the playoffs, they are good right now. I'm going to try to enjoy even though I don't really know how.

But it's taken eight years to get here!

Yep. Dayton Moore has been a bad general manager for most of his time in Kansas City, and he probably still is, but if you think a professional baseball team can just stumble into a winning season like this, you're probably wrong. Moore has done some good things. You can't deny it. I'd prefer a more modern approach -- like the A's or the Rays employ -- but even though it's taken way too long, the team is winning right now. This isn't a dream. You are awake.

Okay, negative half. Seems like the opposite of being a fan of the team, but whatever.

Man, this means another extension for Moore and Yost, doesn't it?

Maybe it does, but that doesn't negate what's happening right now. The Royals are fun to watch. It's confusing and kind of scary, but enjoying it seems like the thing to do. I don't really know what that means, but I'm pretty tired of hating the baseball team I like. This should be a nice break from that, even if it doesn't last very long. 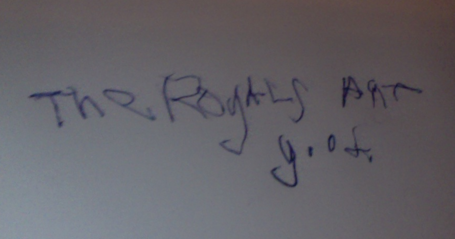