The Cardinals are no longer the small ball, swipe bags to victory team you grew up with. Meet the Moneyball Cardinals.

Cardinals fans like to boast that their team plays the game the right way, and to an extent they're right. The team hustles and plays by the vague, inocuous unwritten rules of baseball of course, except when they don't, but overall they're a fun bunch to root for. However, if you were to think that the "right way" included small ball full of bunts and steals like Ozzie's Cardinals of the 1980s, you'd be sorely mistaken. The Cardinals are no longer a team that gives away outs. In 2013, St. Louis stole just 45 bases, their lowest total since 1958. St. Louis hasn't finished higher than eleventh in the league in steals since 2005.

This year, the offense has struggled mightily, why is why the club finds themselves 30-27, four games back of the Brewers. Like the Royals, they are dead last in their league in home runs (although they have hit ten more home runs - 30 overall - than the Royals). They are fifth in on-base percentage and fourth in doubles, which has led to 3.82 runs per game, eleventh in the league. 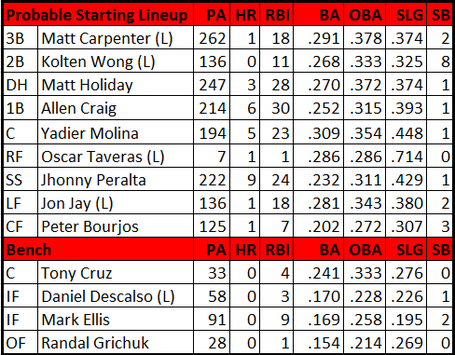 The Cardinals haven't used the designated hitter yet this year, so that's my best guess at how they'll lineup when the series shifts to Kansas City on Wednesday. First baseman Matt Adams would have likely served as the DH, but he is out with a calf injury. Highly touted prospect Oscar Taveras was just called up over the weekend and hit a home run in his second bat. And I thought it took 3-4 years for prospects to develop!

The Cardinals are third in the league in runs allowed per game. They have a terrific 2.95 ERA on the road, compared to 3.76 at Busch Stadium, although they give up more home runs and allow more walks on the road. St. Louis' 3.17 ERA out of their starting pitchers is the second-best in the league.

Twenty-four year old right-hander Trevor Rosenthal has served as the Cardinals' closer, and while he walks too many hitters and has a lofty 4.10 ERA, he has struck out 12 hitters per nine innings, and is 16-of-18 in save opportunities. Former closer Jason Motte has just returned from injury to join Carlos Martinez as a late inning option, and Pat Neshek has been a terrific cheap free agent pickup for the club. Veteran Randy Choate and former Kansas Jayhawk Sam Freeman serve as situational left-handers. 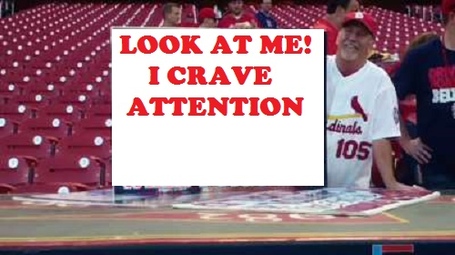