This is going to be a war.

The Royals and Mariners are the fiercest of rivals, and if you need to brush up on your history on why, read Will McDonald's much-acclaimed treatise "The Battle for Grass Creek." Nothing less than the fate of rural Wyoming is at stake tonight.

Adding fuel to the fire is the signing this past winter of Robinson Cano, the man who was showered with so many boos at the Home Run Derby in Kansas City back in 2012 after snubbing Billy Butler, that he spurned the Royals as a free agent, and signed with the Mariners instead. Boo Cano. Never forget.

There are some additional plotlines, like the return of Royals favorites like John Buck and Willie Bloomquist, and the return of former Star beat writer Bob Dutton, who left to cover the Mariners for the Tacoma Times. On top of that, a gaggle of celebrities will be at the game for the Big Slick charity event, and oh yea, the Royals are the hottest team in baseball. Add that all together, and you have what sounds like a sellout tonight, and probably very good crowds all weekend.

The Mariners made a big splash with the Cano signing and it seemed to pay off dividends early. By June 9 they were 34-29 and in line for the second Wild Card under new manager Lloyd McClendon. Since then they've dropped seven of their last ten and are two games back of the last Wild Card spot. Cano did improve the offense, but its still one of the worst offenses in the league, averaging 3.97 runs per game, fourth worst in the league. They are last in on-base percentage, last in slugging, second to last in walks, and second to last in caught stealing. Maybe they need to re-assign their hitting instructor to catching instructor. 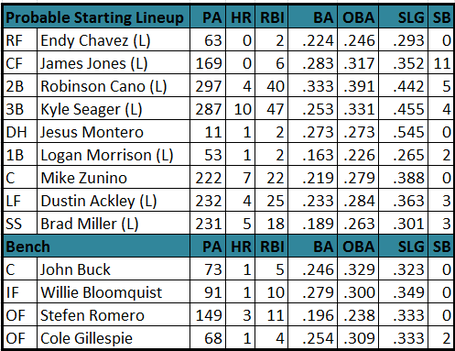 As you can see, its a very lefty-heavy lineup, but as a team, they have hit lefties just slightly worse than righties. The team is without three of its better power bats due to injury - Justin Smoak, Corey Hart, and Michael Saunders, who have combined for 29% of their home runs hit. The club has a lot of positional versatility with guys like Willie Bloomquist and Stefen Romero able to play infield or outfield if needed.

The Mariners clear strength is pitching. They have allowed just 3.52 runs per game, second in the league. It is not a product of Safeco Field either, as their team ERA is nearly identical on the road. Both the rotation and bullpen have been excellent, each ranking second in the league in their respective field. 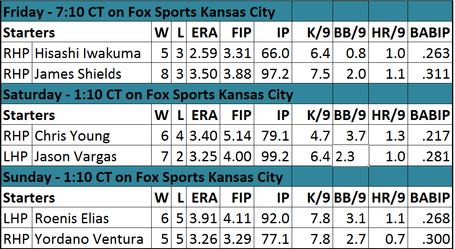 The Royals will fortunately miss King Felix Hernandez, although Hisashi Iwakuma has the fifth most WAR out of all American League starting pitchers since the beginning of the 2013 season, edging out his teammate King Felix. Closer Fernando Rodney is 18 out of 20 in save opportunities, and the Mariners bullpen is fourth in strikeouts per nine innings. Former closer Tom Wilhemsen, Danny Farquhar, and Yoevis Medina will see late inning action, with Charlie Furbush and Joe Beimel facing left-handed hitters.