Well that was fun while it lasted, right? Almost made it a whole week.

Share All sharing options for: Royals Rumblings - News for June 22, 2014

Sam Mellinger writes that the Royals need to step up to the pressure.

So for now, the Royals are saying and doing all the right things. They show up at the same time, put in the same work. Hosmer, actually, responded to the 10-game winning streak by adding to his pregame work since he’s in an awful slump.

This is a strange place for this team. They are better equipped to handle the new context of expectations than the teams that came before them but so far dance to an eerily similar soundtrack.

Most of them don’t want to consider the pattern that’s been set, and that’s entirely understandable. But ask Hosmer. He pauses for a second. Gives it a bit of thought, and then the most honest answer possible to whether this group can pass this last remaining test.

"We’ve never been in this position, so I don’t know," he says. "That’s a question I can’t really answer right now."

You know what they need? MOAR VETERAN PRESENCE. Michael Young awaits your call.

Danny Valencia is back off the disabled list which finally gives us 13 position players as Louis Coleman is sent back to Omaha. I'm beginning to think Michael Mariot has compromising pictures of Dayton Moore somewhere. Mariot is expected to be sent down Tueday when Bruce Chen is activated from the disabled list. Chen had been transferred to the 60 day disabled list, but that was simply a procedural move to make room on the 40 man roster for Justin Maxwell. Chen is eligible to be activated Tuesday, although this will require another 40 man roster move. Got it?

Maybe this seems dated now, but Jonah Keri writes for FiveThirtyEight that the Royals win streak puts them at even money.

Once we take their 10-win streak into account, the Royals have a little better than even odds of making the playoffs. Baseball Prospectus’s Playoff Odds Report gives KC a 42.3 percent chance of getting there. So if you want to peg the Royals somewhere around 50-50, that’s a decent place to start. And if you think about Kansas City’s roster — one with strengths but also significant weaknesses — that makes even more sense...

After nearly three decades in the wilderness, the Royals now have a legitimate shot to see October’s spotlight. It’s about damn time.

I'm not rushing off to Vegas any time soon.

Will Forte, formerly of "Saturday Night Live" and the movie "Nebraska" claims he's an A's fan, but he is a huge George Brett fan.

Here is your American League All-Star voting update. I'm beginning to think the Royals simply are not eligible.

Jeff Passan predicts at least three Royals will be named to the All-Star Game, with Alcides Escobar as a possible snub.

Speaking of All-Star, voting, you can vote for the AAA All-Star starters. This is not a joke. Well, its kind of a joke.

The Colorado Rockies are copying the 2004-2006 Royals, so Deadspin added "Yakety Sax" to the lowlight reel that shows them allowing THREE runs on a wild pitch.

The Padres fired their General Manager Josh Byrnes for not winning enough.

Team USA looked like it was about to clinch a spot in the knockout round of the World Cup, but then they allowed Ned Yost to manage the final minutes.

Wow, this sucks. Isaiah Austin, projected to be a late first round pick in the NBA draft, has to retire due to Marfan's syndrome.

If you'e ever wondered what the movie "Jurassic Park" would look like with a giant bulldog, rather than dinosaurs, here you go.

North Korea is furious at Seth Rogen and James Franco for plotting to kill Kim Jong-Un.

Your song of the day is "Yesterday" by the Beatles. We'll always have June 17,  you guys. 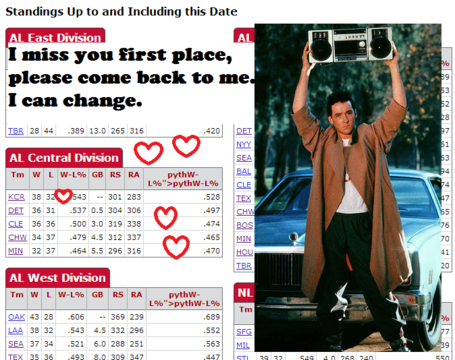