When the ownership group fronted by Magic Johnson took over the Los Angeles Dodgers back in 2012, the club began to spend money like it was Montgomery Brewster in the film "Brewster's Millions." While the club did reach the National League Championship Series this year, they have yet to dominate the league like many expected, and when the club got off to a mediocre start, manager Don Mattingly found himself on the hot seat. Fortunately for him, the club has won nine of their last thirteen games and now has the third best record in the league, although they are still four games back of the first place Giants.

The Dodgers are a franchise long known for their pitching, but their offense has been pretty terrific this year. They are fourth in runs scored with 4.27 runs per game, and are third in both on-base percentage and slugging percentage. Leading the way has been sensational and controversial young Cuban outfielder Yasiel Puig who is fourth in the league in OPS. Expensive veterans like Matt Kemp, and Hanley Ramirez have bounced back from disappointing/injured 2013 seasons to be useful this year, albeit down from their respective peaks. The Dodgers have also gotten surprisingly terrific performances from two younger, cheaper players in Dee Gordon and Scott Van Slyke. Dee (son of former Royal Tom Gordon) leads the league with 39 steals, and the Dodgers as a team lead the league in swipes with 80. 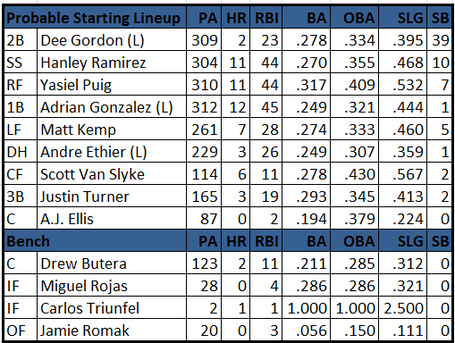 Former Mets infielder Justin Turner has filled in admirably for an injured Juan Uribe and Van Slyke has served as a terific fourth outfielder in the place of Carl Crawford, but the Dodgers bench for this series is very thin. Former Royals farmhand Jamie Romak is mired in an awful 1-20 slump for the year.

The Dodgers have invested a ton of money in their rotation and it has paid off. Their starting pitching is tied with the Cardinals for tops in the National League with a 3.08 ERA and collectively earn $68 million (plus $12 million sitting on the disabled list with Chad Billingsley). The three starters the Royals will face this week combine for an ERA of 2.92 and include Clayton Kershaw, who tossed a no-hitter his last time out. 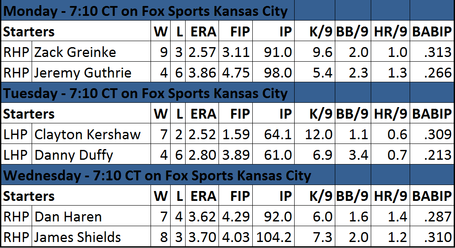 The Dodgers bullpen has been less fantastic, with the fourth worst bullpen ERA in the National League, the second most walks and the third worst strikeout-to-walk ratio. Closer Kanley Jansen has a lofty ERA of 4.26, but has struck out over 15 hitters per nine innings, and is 22 of 25 in save opportunities. Right-hander Brandon League and left-hander and former Royal J.P. Howell have been terrific in late inning situations, but reclamation projects like Brian Wilson, Chris Perez, and Paul Maholm have been far less effective.

This will mark the first return of former Royals Cy Young winner Zack Greinke in a Dodgers uniform. He had previously returned in a Brewers and Angels uniform. I suppose there are fans that will still boo him, because he should have wanted to continue playing for a 90 loss team and taken less money to do so, but I'm sure Zack sleeps well at night with the decisions he's made.