We need to talk about Eric Hosmer

The young first baseman is regressing badly in a year where he should be turning the proverbial corner and becoming a super star.

Share All sharing options for: We need to talk about Eric Hosmer

Offensive production has gone up for the Royals since Dale Sveum was named hitting instructor, this last week notwithstanding, but one player that has not enjoyed a bump in performance is Eric Hosmer. Since Sveum took over hitting instructor duties on May 29, Hosmer is hitting just .192/.221/.313 with six extra base hits in 23 games.

Even more worrying, he has just three walks over that period, and looks absolutely lost at the plate in terms of pitch selection. Take the sixth inning of Saturday's game for example:

And that was just the worst example in an at bat riddled with Hosmer swinging at all sorts of slop out of the strike zone. 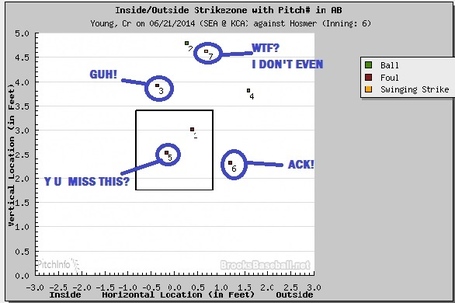 Hosmer is known to be a slow starter, getting off to an abysmal start last year, but turning things on in the summer to have a decent year. But he is even behind last year's terrible start, with an awful on-base percentage and a drop in walks.

Rany Jazayerli was ridiculed a few weeks ago for even suggesting that Eric Hosmer be demoted to the minor leagues. Yet now that suggestion doesn't seem so ridiculous. Mike Moustakas had a .543 OPS when he was demoted to Omaha, Hosmer is still sitting at .648. And while Moustakas had someone (Danny Valencia) to fill in capably while he was working on his swing and having a blast playing the game in Omaha, there are no clear options to replace Hosmer that would be much of an upgrade. Your options would be (a) play Billy Butler at first base and rotate designated hitter and downgrade your defense significantly; (b) give Matt Fields and his 11 HR (and 79 strikeouts!) a chance and promote him from Omaha; or (c) find someone off the trash-heap for cheap and put their rotting corpse at first base. Paging Casey Kotchman, Mr. Casey Kotchman!

None of those options seem particularly palatable, but then of course, neither does continuing to play Eric Hosmer at first base and hitting him third. At the very least, Ned needs to demote Hosmer in the lineup so he can quit killing the offense and maybe receive a message to change his wild-swingin' ways. But if this club really wants to compete for the playoffs this year, they may need to consider finding a stop-gap solution at first base and let Hosmer figure things out in Omaha.