Be on the lookout for Zack at all area Chipotles.

Share All sharing options for: Royals Rumblings - News for June 24, 2014

The Star's Andy McCullough did a chat with fans and revealed that the Royals medical staff has recommended a 150 innings pitched limit for Danny Duffy this year. He also explained why Guthrie has been striking more hitters out lately.

When I asked Guthrie about his recent surge, he explained he's made a conscious effort to throw inside more. When he gave up all those homers to the Mariners back in May, the film revealed the hitters looked too comfortable in the box, and were able to extend on outside pitches. Guthrie wanted to counteract that. So he's thrown inside more, and kept hitters off balance. It's resulted in a few nice games for him, with more strikeouts in the process.

See, that's what is so screwed up about this game," Yost said. "There is no balance. The wins don't ... the 'high' from the wins aren't as great as the 'low' of the losses.

"You win 10 in a row and that's a nice feeling, but it doesn't even match one single loss. Not even close.

The Royals think they made out okay in the Zack Greinke deal. Seems like it from last night's game.

Some guy named Josh Duggan revisited the Nori Aoki deal from this past winter, a deal a lot of us liked at the time, but has been a bit of a disaster thus far.

This is a terrific article from Fangraphs that illustrates just how valuable Alex Gordon's arm is without him ever using it. A sample of his awesomeness:

4. Fly out, runner on third, less than two out. So far, Gordon has held the runner 43% of the time. The league average is 24%. (The sample here is also really small.) (I feel stupid using percentages.)

Alex's nickname should be "Nuke" because he's such a deterrent out there.

Hey, if you don't believe that Alex Gordon is the best defender in left, then check out this knowledge: 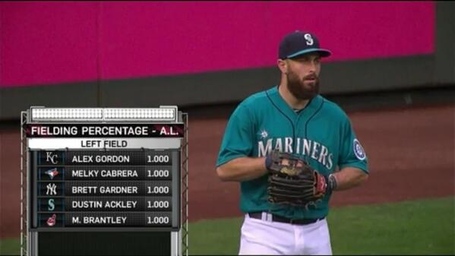 David Lesky at Pine Tar Press looks at whether Danny Duffy is a candidate for a long-term contract.

Using those averages, Danny Duffy could stand to expect about $17 million for his three arbitration years, but there’s a lot of risk with a guy like Duffy, so I might drop it a little and go $16 million for the three arbitration years and then I’d say maybe $9 million for the first free agent year followed by an team option for $12 million with a $1 million buyout. The end result is a four year, $26 million contract for Duffy that could end up at 5 years and $37 million. ...

Hopefully Duffy continues to pitch well enough to make this an argument worth having, but either way, the future of the Royals looks better with a good Danny Duffy pitching at the top of the rotation.

Luke Hochevar is still alive, in case you were wondering.

Scott Spratt writes at ESPN that the Royals have won largely due to defense, and by his metric, the Royals have the third best defense in the league, which actually seems really low to me.

The Sporting News equates each MLB team with a World Cup participant. The Royals are....Nigeria. Dayton Moore has a World Series he would like to share with you if you can wire him $10,000.

Padres pitcher Alex Torres became the first pitcher to wear the new protective caps. While the cap looks a bit funny and recalls memories of Dark Helmet from "Spaceballs", Torres insists the new cap doesn't feel much different from the regular caps. Will these be standard in a few years?

ESPN's SportsCenter has a new $125 million set that will enable them to cover Lebron James from so many more different angles!

Han Solo may be encased in carbonite for the entire Star Wars sequel thanks to Harrison Ford's injury.

It was nice to see you Zack, but we've got two new men in our life - Alcides and Lorenzo. Your song of the day is "I Will Survive" by Cake.