Now that we've sunk back to second place, we might as well look to the future, to the guys that have a chance to bring us back to first place in another decade or so.

Short-season rookie league ball is under way with clubs beginning play last week. The Royals have dropped their Arizona Rookie League affiliate for some reason, leaving them with just two short-season rookie league teams in the United States - Idaho Falls in the Northwest League and Burlington in the Appalachian League. Idaho Falls is for more advanced players, while Burlington is for the newbies. 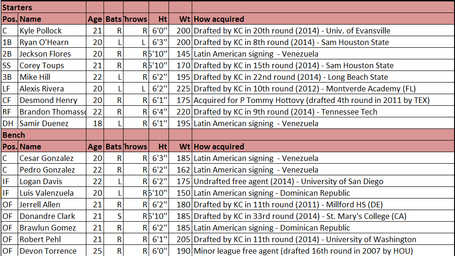 EDIT: Idaho Falls has just tweeted Logan Davis has been promoted to Omaha, although I presume that's just to fill in for a bit. Davis is pretty much organizational filler, sent to play wherever he's needed.

First baseman Samir Duenez was the Royals top international signing back in 2012 out of Venezuela, one of five Venezuelans on the Chukars roster. He signed for $450,000 and was playing for the Low A ball Lexington Legends this year but was assigned to Idaho Falls after hitting .230/.274/.327. Still just 18, Duenez is expected to be a power hitter someday, although he has just one professional home run thus far.

First baseman Ryan O'Hearn was an eighth round pick out of Sam Houston State in the draft a few weeks ago. The 20 year old left-handed hitter hit .292 with eight home runs for Sam Houston State, and was 5-5 with a home run in his professional debut for the Chukars.

Shortstop Corey Toups was O'Hearn's teammate at Sam Houston, where he hit .310 with seven home runs. While he has struggled with a 2-20 start to his career, he has drawn a promising nine walks.

Catcher Kyle Pollock is a 21 year old out of the University of Evansville, taken in the 20th round of the draft a few weeks ago. The right-handed hitter has already homered, but has also committed three errors in four games behind the plate.

Outfielder Desmond Henry was a fourth round pick by the Rangers in 2011, acquired by the Royals in a deal for pitcher Tommy Hottovy. He posted a .634 OPS for Burlington last year, but stole 20 bases in 48 games.

Outfielder Devon Torrence is mildly interesting to me since I'm an Ohio State alum. He played defensive back for the Buckeyes, spending his summers playing baseball in the Astros organization. He failed to stick onto any NFL rosters, so it appears he's giving pro baseball a shot again. 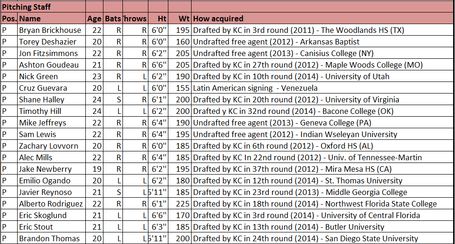 Bryan Brickhouse returns after having Tommy John surgery in 2013. His career was looking decent up to that point, with a fastball in the upper 90s and a propensity for inducing ground balls.

Eric Skoglund was a third round pick in this last draft out of Central Florida where he was named American Athletic Conference Pitcher of the Year. Skoglund has already pitched 110 innings this year, so the club may be cautious with him.

Ashton Goudeau is a local kid out of nearby Maple Woods College, returning after a brutal 2013 season in which he gave up 55 runs in 40.2 innings for Idaho Falls.

Burlington has quite an international flavor with players hailing from Italy, Australia, Colombia, Venezuela, Dominican Republic, Puerto Rico, and the contintental United States.

Chase Vallot was the 40th overall selection this month's draft, a prep catcher out of Louisiana with plus power potential. He has already homered in his first week in professional baseball and is 6-18 to begin his career.

Marten Gasparini was a high profile international signing out of Italy who signed a $1 million bonus and has been called the best European baseball prospect ever. The switch-hitting shortstop is also off to a 6-18 start to his career.

Third baseman Ryan Dale is an Australian youth who signed for $245,000. He projects to have plus power, although he did not hit a single home run in 27 games for the Arizona Royals last year. 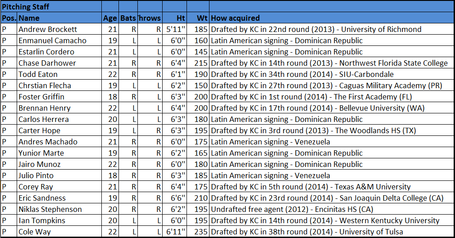 Foster Griffin was the 28th player selected in the 2014 draft as compensation for Ervin Santana. He has high upside and can already throw in the low 90s with a repertoire of three pitches.

Julio Pinto signed with Samir Duenez out of Venezuela, with Pinto receiving a $375,000 bonus. The right-hander is new to pitching, but throws in the low 90s and posted a 2.65 ERA in 13 starts for the Dominican Royals last year.

Cole Way was a late round pick out of Tulsa in this year's draft. Way did not play baseball at Tulsa, but was instead the punter on the football team. The 6'11' Way had played baseball in high school, but received little interest from programs. He has since added 8-10 miles per hour to his fastball to throw in the low 90s.

Rosters are subject to change and players like first round pick pitcher Brandon Finnegan may sign soon now that his college season is over, and seventh round pick outfielder Brandon Downes may join a roster once his Virginia team is done in the College World Series.