Share All sharing options for: GMDM and Team Construction Philosophy

In an article by Jeffrey Flanagan last week, Dayton Moore said some words about his philosophy in team building. I will highlight some quotes from it for you here.

"The two things you have to have to be competitive over the course of the season is pitching and defense," he said. "It's been that way for over a hundred years."

Here is another quote, coming literally right after the above quote in the article.

"That's the thing that keeps us competitive through the tough times. We can pitch it and we can catch it. Then when the offense hits, we can go on these runs."

I might be a little late in analyzing these quotes, but it's not like Dayton's philosophy is changing anytime soon. Let's break this down point-by-point.

His first point is that you have to have pitching to be competitive over the course of the season. I don't necessarily disagree with him. It is, in fact, true that a player must stand on the mound and throw a ball for baseball to occur. I do, however, disagree with the idea that pitching should be the foundation of a team construction philosophy.

We should be familiar with the fact that pitchers get injured more often than position players. A quick Google search reveals this. So, right off the bat, building your team with pitchers as the foundation is like using a wooden foundation instead of a concrete foundation. Another fact with which you may or may not be familiar is that pitchers, at least recently, have spent more time on the DL than position players when they have been injured.

Using Jeff Zimmerman's disabled list data from 2010-2013, I looked at average days spent on the DL split by pitcher and position player. 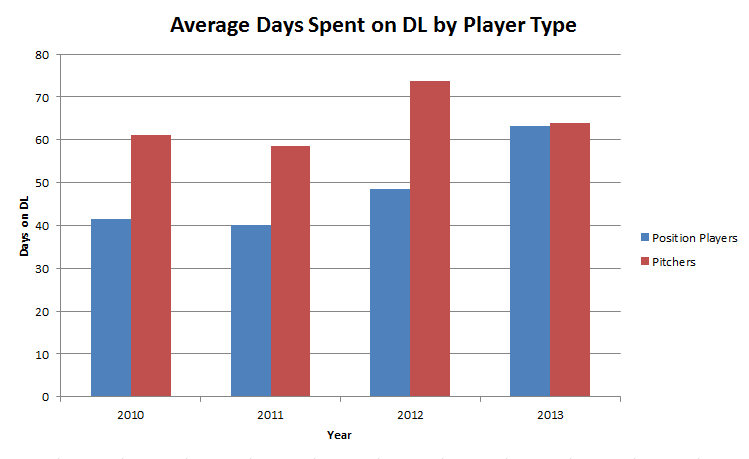 You might say, "Hey, pitchers have this somewhat pitcher-specific season-ending injury, a torn UCL. That could be skewing the data! Maybe average isn't the best measure!" Well, sure. You could be right. The graph below shows the median number of days spent on the DL, which should account for the skewed nature of the data. 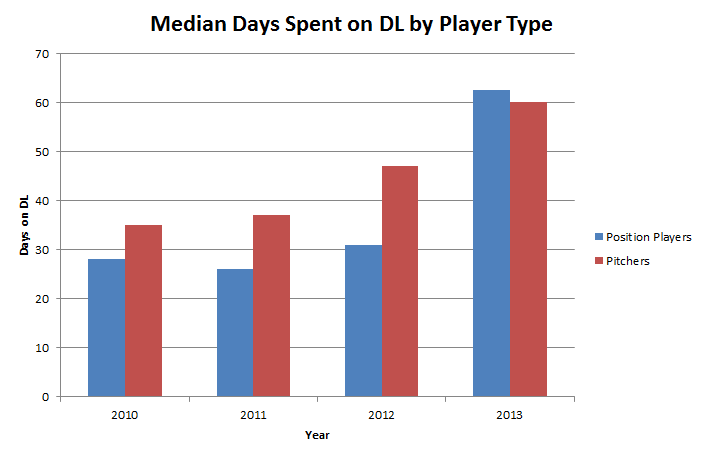 Dayton's second point is that defense is necessary for the long haul. I don't necessarily disagree with that, either. The value coming from defense certainly isn't zero. But let's think about defense in the context of the Inside Edge fielding data from FanGraphs. The Inside Edge data classifies each defensive play into different categories as such: routine, likely, even, unlikely, remote, and impossible. A "routine" play is a play that pretty much every defender at that position should make. An "impossible" play is a play that no defender can make. So, a good defender can really only make an impact in those other categories. Unfortunately, about 80-85% of plays are categorized as routine or impossible, depending on the year. A good defender, according to this logic, can really make an impact on only 15-20% of plays. Again, that's not worthless. But is it worthwhile to build a team around being able to steal some of those 15-20% of plays?

Maybe you prefer DRS or UZR when thinking about defense. I'm cherry-picking here, but last year's World Series losers, the Cardinals, had a very poor defense as measured by both systems. The winners, the Red Sox, had a decent defense but weren't world beaters. The Royals had one of the best defenses in the league, if not the best. They finished 86-76. One of the other best defenses from 2013, the Diamondbacks, finished 81-81. Both the Diamondbacks and the Royals had terrible offenses. Both the Red Sox and Cardinals had fantastic offenses.

That brings me to the second quote, and Dayton's final point. Maybe I'm reading too much into this quote, or seeing what I want to see, but it sounds like Dayton has the idea that pitching and defense are constant while offense is the highly variable component of baseball. Pitching is not constant. Pitching is full of injuries and inconsistent performance. Pitchers are always fine right up until they aren't. If pitching is more constant and dependable, why don't pitchers get 10 year contracts? Good defense is fairly constant but doesn't make a difference on a large amount of plays. Sure, offense can go into slumps. But when your offensive philosophy revolves around swinging at lots of things and making contact on lots of things, i.e., batting average, naturally your offensive output will be dependent on BABIP, i.e., luck. Your offense will disappear when balls don't fall right, and your offense will explode when holes are found. One of the top offenses this year, the Athletics, has a mediocre batting average and a fairly low BABIP. The Red Sox and Cardinals last year had ridiculous on base percentages. Pitching and defense are important, but in the hierarchy of things that are important, I'd put offense first.