In the sub-Trout tier of position players, Gordon makes a pretty good case for supremacy.

Share All sharing options for: Alex Gordon: The (second) best player in baseball

Mike Trout might be having the best season of his career, which doesn't even seem possible, but it's true. He's also on pace to put up a third consecutive 10-win season, according to FanGraphs. The other guys who have done that: Barry Bonds, Ted Williams, and Babe Ruth.

So, we've established that Mike Trout is better than everyone. Not hard to do. But after him, the mortal players that remain can be evaluated in many ways. Some of those ways are more popular than others. Homers are cool. Some people swear by RBI. Whatever. There are many ways to look at a player's impact on the game. None of them are perfect, but if you don't have a preference at the moment, fWAR is probably going to become your favorite after you look at this: 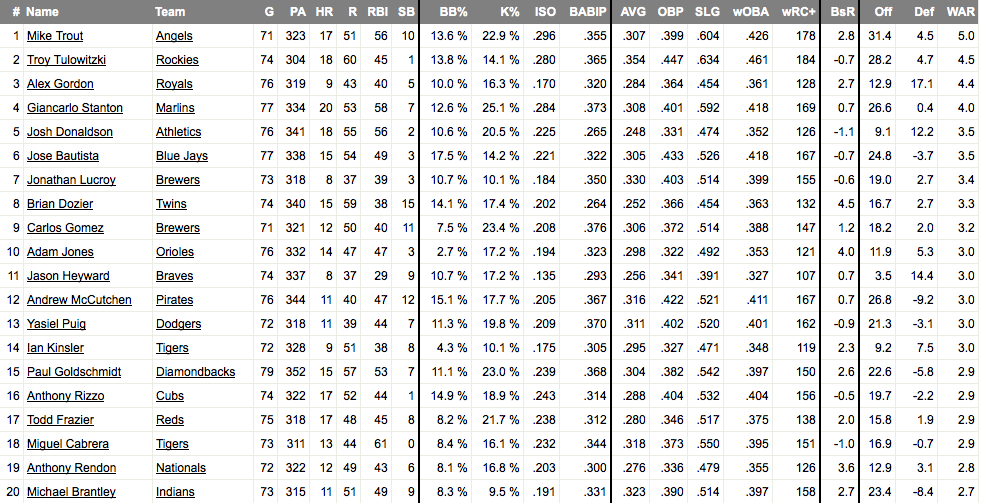 Alright, so technically Troy Tulowitzki is the second-best. However, Alex Gordon has averaged 700+ plate appearances over the last three years. Tulo ... a little over 400. That doesn't really have anything to do with this season, which is what the numbers above represent, but let's hold it against him since it really doesn't matter who the second-best player in baseball is ... unless it's ALEX GORDON.

Everyone has a different about stuff like this, and again, it doesn't really matter, but it's pretty cool that you could make the argument for Gordon being the best* in baseball without sounding like a complete lunatic.

FanGraphs' Jeff Sullivan recently wrote an excellent article about the value of Gordon's arm, especially when he isn't using it. According to the site's metrics, Gordon has the best arm (rARM or Outfield Arm Runs Saved), the second-most defensive runs saved, he's made the fifth-most plays out of his zone, and he has the highest ultimate zone rating of any player at any position. That includes shortstop messiah Andrelton Simmons, uncontested NL Gold Glove incumbent Yadier Molina, and any other defensive genius you can think of. He already has as many DRS as he had last season. With a similar second half, he'll finish the year with one of the best single season performances in the Fielding Bible era.

In fact, since he started playing left field in 2011, Gordon has more defensive runs saved than anyone, only Austin Jackson has made more plays outside of his zone, and only Carlos Gomez and Jason Heyward have a better UZR/150 over that span. That, paired with his .287/.358/.458 batting line, is good enough to make him the fifth-best position player in baseball over the last three and-a-half years.

But we're talking about this year. This year, he's hitting .284/.364/.454 with an improved walk rate and the best strikeout percentage of his career. So um, he can hit a little bit too, to put it mildly.

So while Gordon might only be the second- or third- or fourth- or whatever-best player in baseball, it's probably safe to say he's the best defender this year.

Alright, I'm sure you're wondering: We knew he was good, why the sudden Gordon extolment?

Because he hasn't been able to crack the top 15 in AL All Star balloting for outfielders so far. Jose Bautista currently leads AL outfielders despite the fact that Gordon has been a full win better than him. Gordon also trails Torii Hunter, who has a -1.0 fWAR on the year.

WAR isn't everything, but it's a major statistic. Imagine the league leader in batting average or home runs being left off the All Star roster. Unless John Farrell runs into a Phineas Gage-type situation, he'll pick Gordon, but the fact that a top five player isn't a shoe-in is absurd ... especially since the game actually matters.