Angels Series Preview: Save this homestand

This homestand is looking like a huge wasted opportunity. This weekend is the last chance to save it.

Share All sharing options for: Angels Series Preview: Save this homestand

Just a week ago the Royals were riding high off a very successful series, still in first place over the Detroit Tigers, and ready to start a nine game homestand to carry the momentum to the end of the month. Instead, we saw the Royals get swept by the Mariners, drop two of three to the Dodgers, and now will have to sweep the Angels just to have a tolerable 4-5 homestand. Its almost like no one cares that we were in first place in June anymore. Where's our award?

The Angels come into town with the third best record in the league at 44-33. A few weeks ago, they took 2 of 3 from the Royals in Anaheim. Since then they've gone 16-12, but are currently riding a six game winning streak. Over that time they've released struggling 42-year old designated hitter Raul Ibanez and activated injured slugger Josh Hamilton. So the lineup the Royals will face this weekend is an upgrade over the model we saw a few weeks ago.

The Angels are second in the league in runs scored per game, with an average of 4.81 per contest. They are fourth in on-base percentage, third in slugging percentage, and are second in triples, which could be a factor in Kauffman Stadium. 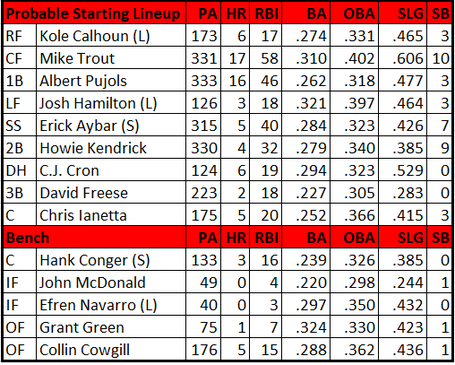 We saw Matt Shoemaker back in the series back in Anaheim, and at the time he looked like typical AAA filler summoned to pitch in the big leagues because the club had no one better to throw out there. He was thought to be the Angels version of Aaron Brooks. Well something happened along the way - the 27-year old career minor leaguer Matt Shoemaker turned into a good pitcher. The minor leaguer with a career 7.4 strikeouts per nine innings on the farm has an eye-popping 9.2 strikeouts per nine innings in 50 big league innings this year. Shoemaker has refined a splitter-changeup with tremendous bite to it that has allowed him to take the league by storm. 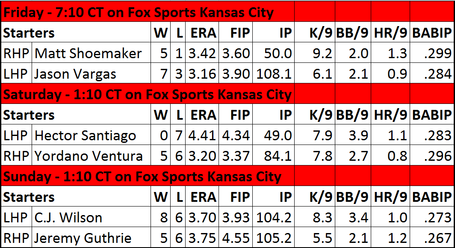 Tyler Skaggs was supposed to be activated for Saturday's start, but he suffered a setback in his rehab from a hamstring injury, so the struggling Hector Santiago will make another start. The Angels overall are fifth in the league in runs allowed per game, with 4.16 per game given up. The Angels closer situation is in a bit of flux with Ernesto Frieri and his 6.39 ERA losing the job to right-handed specialist Joe Smith for now. Shawnee Mission South High School alum Mike Morin has been fantastic in the pen for the Angels with a 1.37 ERA in 25 appearances with right-handed hitters hitting just .128/.186/.231 against him.