It was Ladies Night, and everyone knows chicks dig the long ball. 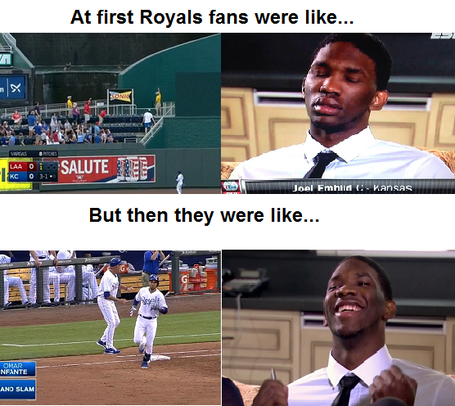 Nine pitches into the game, Mike Trout hit a blast that either traveled 445 feet if you believe the Royals, or thirty-six miles if you believe ESPN. Chris Cron showed the Angels had their "Kauffman Stadium-swing" down already, by blasting a home run of his own in the second to make it 2-0.

The Royals equaled a season-high seven runs in one inning, as they sent eleven batters to the plate in the third. Alcides Escobar got it started with a double, followed by a bunt single by Jarrod Dyson that plated a run on David Freese's error. Eric Hosmer singled and Billy Butler then walked to load the bases. After an Alex Gordon sacrifice fly, Salvador Perez singled to load the bases again to set things up for Omar Infante's blast.

As commenter "plus calves" said in the game thread, Omar Infante has more RBI this year than Chris Getz had in 2012 and 2013 combined. And Infante is having a down year.

The Royals would add another run in the fourth to make it 8-2, but Jason Vargas continued to be wobbly and left in the fifth, with the Royals clinging to an 8-6 lead.  Michael Mariot, who was missing and presumed dead for the last two weeks, was discovered by authorities warming up in the Royals bullpen. Michael Mariot, he of the 6+ ERA, was put into a jam and actually got himself out of it. BOOM, Yosted.

Then the big boy bullpen arms got to pitch and it was lights out from there. Kelvin Herrera, Wade Davis, and Greg Holland went to work and kept the Halos from any serious scoring threats the remaining four innings. Holland was his usual nasty self to pick up his 23rd save of the year, while Lorenzo Cain and Salvador Perez each enjoyed a three-hit night. But it was Omar Infante's one hit of the night that was the star of the show, for it was Ladies Night, and chicks dig the long ball.