Its the second half now, so if the Royals have another run in them, now is the take to take it.

Share All sharing options for: Twins Series Preview: Its not early anymore

We're at exactly the halfway point in the season, so its not really early anymore, but its not exactly late yet either. The Royals still find themselves in contention at 3.5 games behind Detroit for the division lead and just 1.5 games back of a Wild Card spot. We enter a critical month for the Royals however, one in which true contenders may begin to separate themselves, and teams will have to assess whether they will be buyers, sellers, or stand-patters at the deadline.

The Royals begin this critical stretch with a nine-game road trip against three teams with losing records - the Twins, the Indians, and the Rays. They'll start tonight in Minnesota, where the Twins sit in last place in the Central with a 37-43 record. They have taken four of six from the Royals this year, including a sweep at Target Field back in April. The Twins have been as streaky as the Royals lately, sandwiching a four game winning streak in between two five game losing streaks recently.

The Twins have shuttled guys in and out all year, so the roster looks different than the team we saw back in April. Chris Colabello, who got off to such a hot start and is still fourth on the team in RBI, is now playing for the Twins AAA affiliate. Starting shortstop Pedro Florimon lost his starting job to rookie sensation Danny Santana, but with Santana on the disabled list, Florimon and Eduardo Escobar will start at shorstop. The Twins also added free agent slugger Kendrys Morales mid-season, although he has been a huge disappointment thus far. The Twins are ninth in the league in runs scored, thirteenth in home runs, and have actually been out-slugged by the Royals this year.

Joe Mauer is a shell of his former self at this point, although some think his struggles may just be a slump. While he is dandruff-free, his walk rate is down, his strikeout rate is up, he hits for very little power, and his average is down to a career low .270. That's not a good combination for a 31 year old first baseman still owed $81 million over the next four and a half seasons. 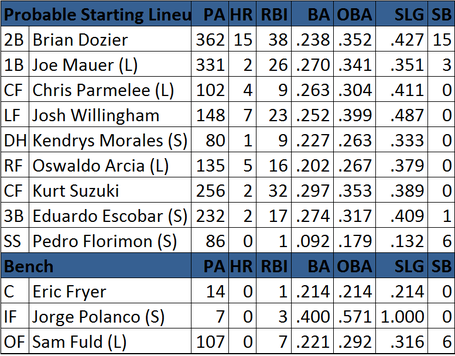 Trevor Plouffe is not officially on the roster yet, but he is expected to be activated from the disabled list today after missing two weeks with an oblique injury. The third-baseman is hitting .241/.320/.400 with 5 HR 38 RBI on the year, and will likely move Escobar to shortstop and Florimon to the bench.

The Twins made a splash signing free agents Phil Hughes and Ricky Nolasco to lucrative deals to shore up their awful rotation from a year ago. While Hughes has been one of the best free agent bargains in baseball, Nolasco has been a disaster. The Twins still have the worst ERA from their starting pitchers in the league at 4.87. 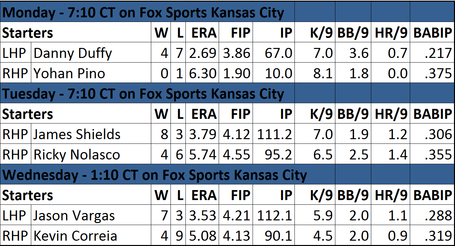 The Twins still have a "pitch-to-contact" philosophy as they are second in fewest walks allowed and dead last in strikeouts. They have kept the ball in the ballpark however, allowing the fewest home runs. Left-hander Glen Perkins is 20-for-23 in save opportunities with a 3.24 ERA and a terrific 45-6 strikeout-to-walk ratio in 33.1 innings. Casey Fien from the right side and Brian Duensing and Caleb Thielbar from the left-side have been fairly effective, but the rest of the pen has been a work in progress.