Doing the right thing the wrong way, part 1: The Philosophy

The Royals' pitching development machine under Dayton Moore hasn't churned out any viable starting pitchers except Yordano Ventura. Here is one potential reason why.

Share All sharing options for: Doing the right thing the wrong way, part 1: The Philosophy

All of you are familiar with the Royals' inability to develop good starting pitchers, except Yordano Ventura I suppose. With his recent injury news, though, who knows how long his elbow will stay attached. All of you are probably familiar with Dayton Moore once saying that pitching is the currency of baseball. The Royals lack this currency, at least the valuable form of it. Whenever I read something about the Royals' inability to develop their minor league talent, concrete reasons are rarely given. I'm tired of this. I want something tangible. Something real.

The Royals were at one point professed to have The Best Farm System Ever, which says that at one point, the Royals were loaded with talent, so a lack of talent can't be the reason. Given the uneven talent level of the minors, it's difficult to point to statistics in searching for a cause. When I look at other organizations like the Marlins, the Rays, and the Athletics, who regularly produce pitching talent, I have to wonder if an organizational philosophy is to blame. Many people believe that the Royals have some sort of cookie cutter philosophy when it comes to teaching pitches (fastball, curveball, changeup). The Royals deny that this is the case. Assuming that the Royals are telling the truth (a BIG assumption), we have to look elsewhere. I believe that pitching mechanics are where we can start looking for causes.

First, a disclaimer. I am not a scout. I was a pitcher when I played, but none of my coaches ever really taught me what proper mechanics were. Thankfully, this was remedied when I started reading Doug Thorburn's work at Baseball Prospectus. Reading his work informed me of why I was the pitcher I was (I was basically a right-handed version of Mark Buehrle in little league). The following analysis of ONE aspect of the Royals' pitching development philosophy comes from trying to apply what I have learned from reading his work*.

*For those who don't know, Doug Thorburn used to work for the National Pitchers Association. As part of his job, he analyzed thousands of pitchers' deliveries using hi-tech video equipment. He studied the best pitchers and found out what parts of their mechanics made them who they were. He now has a mechanics grading system, which he uses in his work at Baseball Prospectus and the Starting Pitcher Guide that he and Paul Sporer produce annually.

According to Thorburn, there are various parts of pitching mechanics that can be isolated, observed, and analyzed. However, we must always keep in mind that a pitcher's mechanics are a fluid kinetic chain of events; what happens earlier in the chain affects what happens later. I'm going to be looking at one element of the chain: posture at release point.

Thorburn's definition of posture is the position of the head and spine from foot strike to release point. The best posture pitchers will line up the head over the spine and not tilt the spine sideways. Again, according to Thorburn, proper posture at release point is important for several reasons. First, proper posture helps maintain repeatable mechanics, which lead to a consistent release point and good command. Second, proper posture helps extend release distance, which is important for reducing the amount of time the batter has to react to a pitch, thus increasing perceived velocity. Third, proper posture helps reduce injury risk. The recent position statement of the American Sports Medicine Institute on Tommy John surgeries emphasizes that teaching proper mechanics, including posture, should be of paramount importance. Madison Bumgarner is an example of excellent posture and good mechanics in general, and he'll be included in the screenshots below as a frame of reference.

The Royals are cognizant that posture is important. However, they seem to be teaching it incorrectly. The Royals apparently subscribe to the downhill plane theory ("getting on top of the ball"). The idea behind generating downhill plane on a pitch is to get a better angle on the swing plane of a batter to generate more ground balls. Thorburn writes about the downhill plane idea, and he hates it. For most pitchers, in order to get that downhill plane, the pitcher must tilt his spine sideways to achieve a higher arm slot at release point. Remember all those things I mentioned earlier that result from good posture? Well, all those things are sacrificed in the name of generating a downhill plane. An inconsistent release point for worse command, shorter release distance for less deception, and a higher injury risk all result from trying to get the downhill plane.

What follows is a series of screenshots* taken of various pitchers developed in full or in part by the Royals. The pictures are not from any specific time frame. Please keep in mind that these snapshots are one picture from one pitch. A pitcher's mechanics can vary from game to game. Thorburn notes that posture tends to improve as a pitcher ages, so the improper posture of the following pitchers could be due to youth. In addition, the angle of spine tilt could be part of the pitcher's natural biomechanical signature, and trying to get better posture could result in upsetting the kinetic chain. However, the purpose of this analysis is to look at an organizational philosophy, not a specific pitcher's mechanics.

*Screenshots of minor leaguers with no MLB footage come from YouTube. WARNING: There are a lot of screenshots forthcoming.

Madison Bumgarner. Bumgarner's posture is as good as it gets. Bumgarner's average posture is better than most pitchers' best posture. Bumgarner's head is very closely lined up over his center of gravity, and he is propelling himself forward for extra release distance. There is no spine tilt. Bumgarner's back foot appears to be off the ground at release point, which is a detriment to balance, another element of a pitcher's mechanics that Thorburn grades. However, he repeats this fairly consistently, so perhaps it isn't a problem. We'll see several Royals players do the same thing. 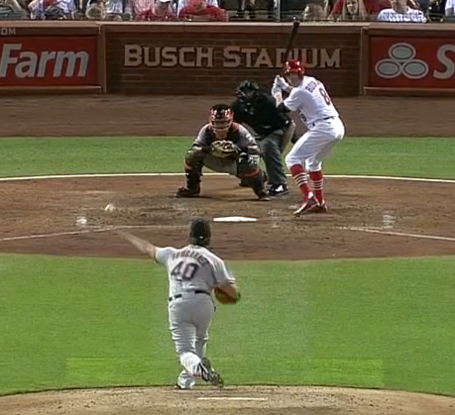 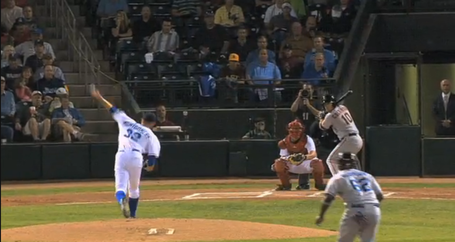 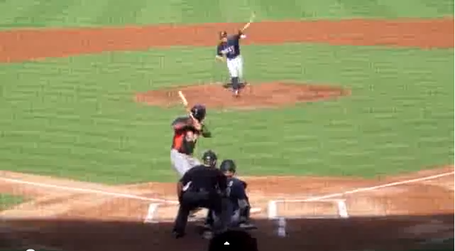 Chris Dwyer. He has a very similar angle of posture to Montgomery here. There is some spine tilt. It looks like his arm slot is even higher than Montgomery's, though, which could be due to his natural mechanical signature. His back foot has already left the ground before he has released the pitch. As I mentioned earlier, that's not really a good thing, but it doesn't seem to affect Bumgarner. 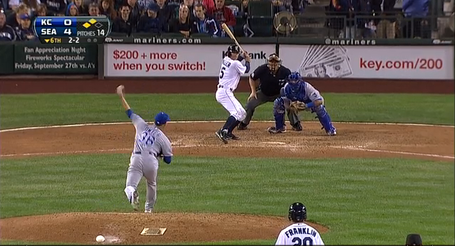 John Lamb. The spine tilt is quite noticeable. It's worse than Montgomery's and Dwyer's. If you squint hard enough, you might be able to see that it appears that his back foot has also left the ground before he released the pitch. It's hard to tell. 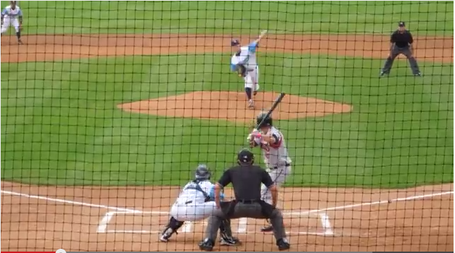 Jason Adam. Wow. That's pretty poor posture, but he's not achieving the high arm slot. Again, it looks like his back foot has left the ground before release.

Kyle Zimmer. He's got a little bit of spine tilt. I'd say it's slightly better than Montgomery's or Dwyer's. Zimmer's back foot is still on the ground. If you have a Baseball Prospectus subscription, I would encourage you to read Thorburn's article on Zimmer for a full description of his mechanics. If you don't have a subscription, the basic gist is that Zimmer's mechanics have the potential to be really good, including his posture. 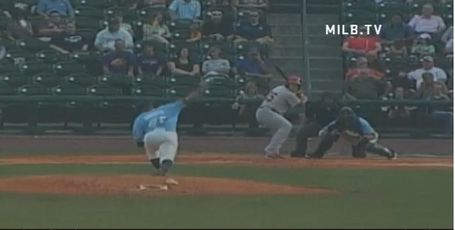 This is not a comprehensive list of minor league pitchers in the system, obviously. I tried to focus on more high-profile prospects. Other prospects not pictured here at whom I looked included Sean Manaea, Miguel Almonte, Christian Binford, Tyler Sample, Robinson Yambati, Sam Selman, and Aaron Brooks. Selman, Manaea, and Brooks all have a little spine tilt, but it isn't that bad. The others in that list all have terrible posture. 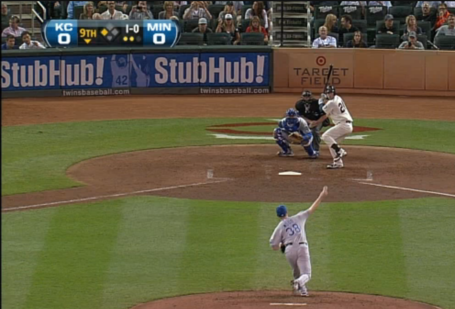 Everett Teaford. There is some spine tilt, but it's not as bad as others. 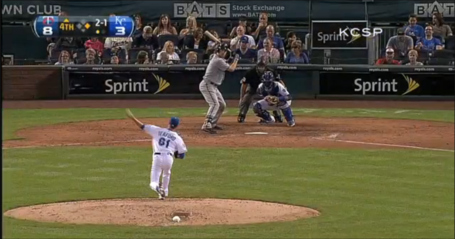 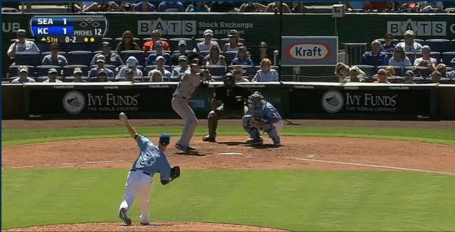 Michael Mariot. There it is again. Spine tilt. 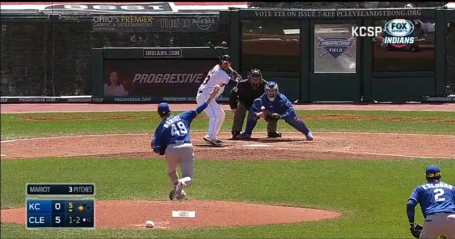 Danny Duffy. He's got the spine tilt, and his back foot appears to be off the ground. 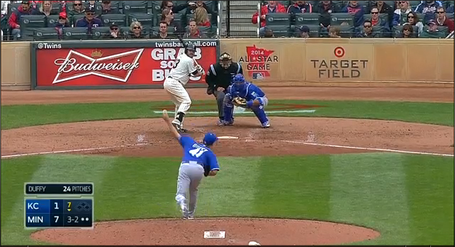 Jake Odorizzi - Royals. He's got the spine tilt and the back foot issue. 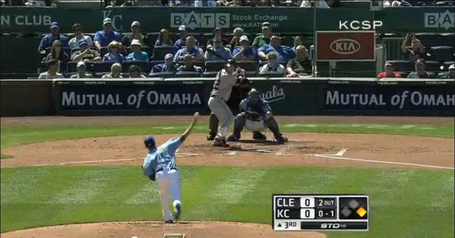 Jake Odorizzi - Rays. There doesn't seem to be much difference, except his back foot appears to be on the ground. 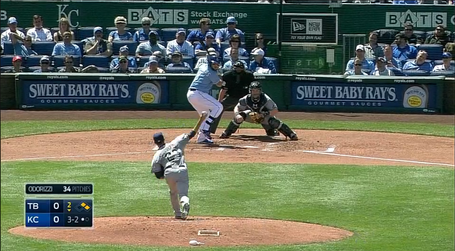 Yordano Ventura. He's got spine tilt and his back foot is off the ground. 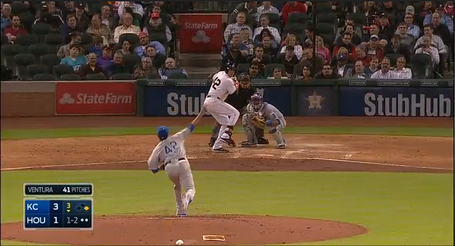 Yordano Ventura - 10 pitches later. Remember when I said mechanics fluctuate, and that you had to keep in mind that I was presenting one pitch from one game? Well, for illustration purposes, here is a pitch from the same game only 10 pitches later. Some of the same things are there-the spine tilt, the back foot off the ground. He's crouched more, though. 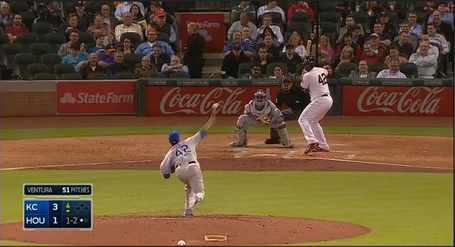 I am analyzing some relievers here for completeness. Aaron Crow was supposed to be a starter.

Greg Holland. His mechanics are egregious. I'm not sure how he manages to get any pitches over the plate. I feel like his mechanics are a ticking time bomb. This screenshot looks like it could be Carlos Marmol pitching. 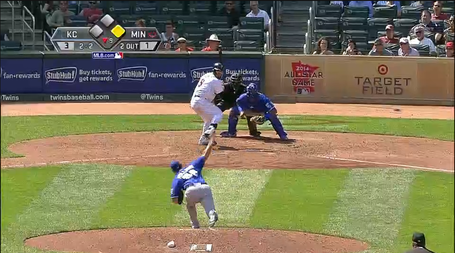 Kelvin Herrera. The spine tilt is not the worst, but it's not great. His back foot is off the ground. 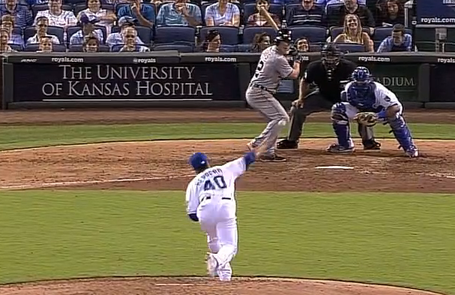 Aaron Crow. He's one of the biggest offenders aside from Holland. 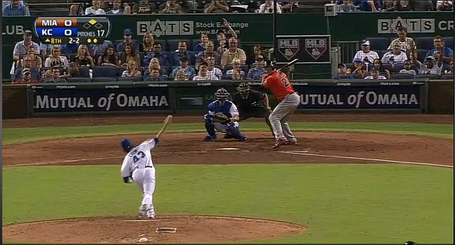 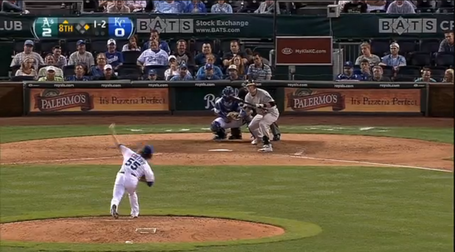 Louis Coleman. There isn't that much spine tilt, but there is a lot of flexion. His posture and spine flexion likely help increase his release distance. His legs form scissors, though. 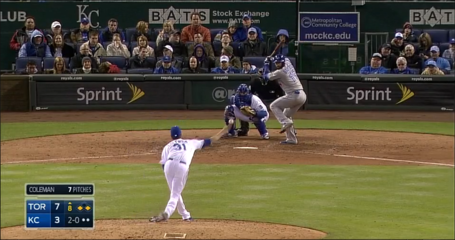 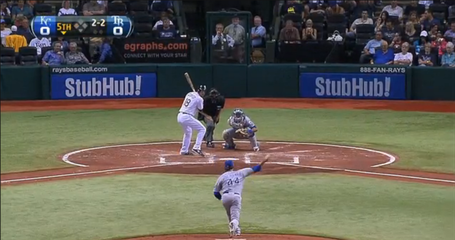 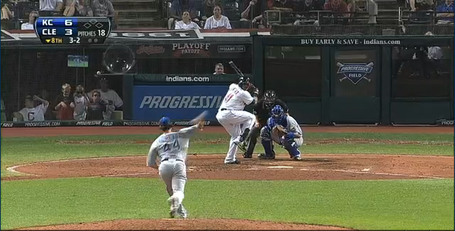 I have some ideas relating to Hochevar's mechanics about why he didn't pan out as a starter. I'll talk about them in part two.

In conclusion, the Royals, in an attempt to generate downhill plane, prefer their pitchers to have some degree of spine tilt. This isn't a complete list of players, but the frequency of poor posture within this sample is stark. It looks like the Royals are emphasizing that their players get the top of the spine (the center of the neck) lined up with the outside edge of the forward hip at release point, but that could be a trick of the camera angles. Perhaps some pitchers already have some spine tilt when they arrive, or perhaps the Royals teach it, or perhaps both. Unfortunately, the emphasis on spine tilt could be one cause of the Royals' inability to develop any starting pitchers.

A starting pitcher must be able to stay healthy and repeat his delivery to achieve good command. Without premium velocity, which itself is a risk factor for injury, deception through extending release distance becomes more important to increase the perceived velocity of the pitch. Sacrificing posture and emphasizing spine tilt achieves none of these things. I will not Trust the Process.

Part two will discuss some of the consequences of this organizational philosophy as it relates to resource utilization.