Did the Yankees have a ceremony for George Brett?

Share All sharing options for: A Plea to the Kansas City Royals to Show Some Self-Respect

Starting today, the Yankees come to town for a 4 game series. Since this will be the only time the Yankees play in Kansas City this year, it will be the last time that Derek Jeter plays in Kansas City. Therefore, the Royals beat writer Andy McCullough announced that they would be honoring Jeter and donating $10,000 to his foundation.

I know it's all the rage and  everybody's doing it, but I am begging the Royals, do not have a ceremony honoring Derek Jeter. Please don't. For sake of self-respect and dignity, just don't. Don't give him a gift. Don't bring him out to honor him. Don't play career highlights. Just Don't.

Derek Jeter was a really good baseball player. I get that. But enough with the ceremonies. You had one for Mariano last year, but I'm willing to cut you some slack on that one, as maybe you felt guilty over the outfield warning track thing.

But with Derek there is no reason to do that. He was an opponent. He spent the last 20 years trying to beat the Royals, and he was usually successful. You don't have to have a ceremony or give a gift. His retirement is not something to be celebrated. It should be mourned. I would love to see him out there for the Yankees for the next 10 years when they play the Royals, but alas, he is retiring instead. Honoring him inside of Kauffman stadium has all the feel of saying, "Thank you sir, may I have another?"

So Kansas City, please show some self-respect and dignity. Treat the upcoming Yankee series as just another series against just another middle of the pack team you are competing against for a wild card spot. Did the Yankees ever have a ceremony or gift for George Brett? In fact, agree to a trade off with the Yankees. If they agree to have something honoring George Brett then you have something honoring Derek Jeter. Otherwise, act with some dignity.

In other words, don't be this guy: 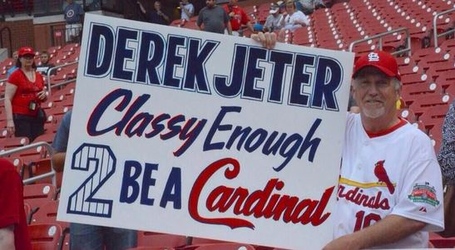 Now, I'm sure all of this will be ignored. No doubt Dayton Moore will be out doing some type of promotion like this (picture courtesy of @TylerDrenon): 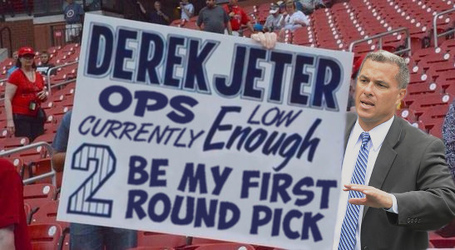 So, the Royals feel they must join the parade in paying homage to one of the 4 - 5 best shortstops of his generation. If they must give a gift, they should consider one of the following ideas instead:

An autographed picture of George Brett

I'm sure Derek would greatly appreciate an autograph from a player who was able to get over 3,000 hits and hit more than 300 home runs.

Again, he would likely appreciate this one. The larger glove would help with his limited range, and he would be thrilled to have the autograph of the best shortstop on the field that day.

As Sam Mellinger has pointed out, those shuttlecocks are nothing but evil. Why not give them to Derek Jeter? Actually, I think I like this idea the best. In one move, it could remove the curse from Kansas City, transfer it to New York, and free a truly wonderful museum (that everybody should visit at least once a year) from such hideous monstrosities.

So, what will it be, Kansas City? Will it be self-respect and dignity, or fawning sycophantic servility like everybody else?