I don't know if you've heard, but this is the last season for Derek Jeter, the captain of the Yankees. Jeter has been overrated for so long he's become underrated by the stat community in some respects. For all the ridicule over how the media fawns over him and overrates his defense, "clutchiness" and leadership, he is a player with the ninth most hits and eleventh most runs in baseball history, the ninth best OPS+ among all shortstops, and the second most offensive WAR among shortstops in baseball history (min. 3000 PA). Aesthetically, he's a fun player to watch, he's been a model citizen off the field, and he dated Minka Kelly who is just absolutely gorgeous. So you might want to get out to the K this weekend, because this will be the last time you get to see him play here.

Still, some of the fawning is...a bit much. There's a good case to be made that handing the man presents is a bit of overkill, and I can't imagine Jeter really cares much about a #2 surfboard given to him by the Angels. Let's give him a round of applause and....that's it. He's a Yankee after all.

Here is the scouting report on Derek Jeter: 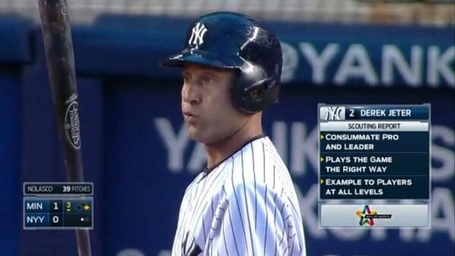 The Yankees were tired of relying on players like Jayson Nix and Lyle Overbay, so this past winter they splurged on free agents like Jacoby Ellsbury, Brian McCann, and Japanese import Masahiro Tanaka, who the Royals will miss in this series. However, they also let Robinson Cano walk, and have had to fill the void from his departure and the suspension of Alex Rodriguez with guys like Brian Roberts, Kelly Johnson, and Yangervis Solarte. Solarte is a rookie infielder who has come out of nowhere to put up solid numbers for the Bronx Bombers because, of course, its the Yankees. However, New York still has a lot of old dreck on this roster, like Roberts, Alfonso Soriano, Ichiro Suzuki, Jeter (sorry My Captain!) and even Carlos Beltran, who the Royals pursued this past winter (dodged that bullet!). Subsequently, the Yankees are just 11th in the league in runs scored, with a disappointing .316 team on-base percentage. 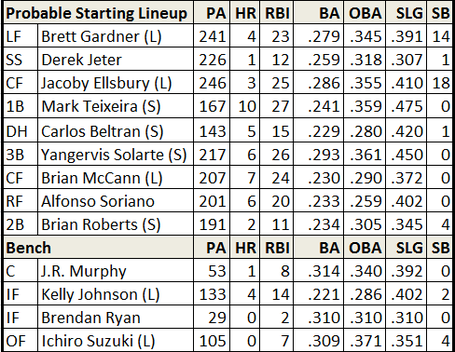 The Yankees splurged with a $155 milion contract to Masahiro Tanaka, and he has been worth every penny with a 9-1 record and a 2.02 ERA. Fortunately, the Royals will miss him and the injured (and declining) C.C. Sabathia, leaving them to face a hodge-podge of unproven youngsters from New York. As a team, the Yankees are eleventh in runs allowed per game, and lead the league in home runs given up, yet are the stingiest in walks allowed. The Yankees pitching staff has been much better away from cozy Yankee Stadium, with a 3.42 ERA away, compared to a 4.62 ERA in the Bronx. 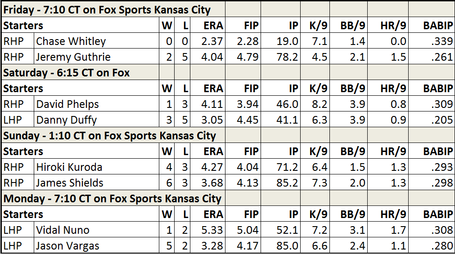 The greatest closer in the history of the game is gone, but the front of the Yankees pen has still been effective with closer David Robertson and rookie Dellin Betances each striking out over 15 hitters per nine innings. The rest of the pen has been a motley crew of no-namers like Adam Warren, Jose Ramirez, Matt Daley, and Wade LeBlanc. The bullpen as a whole has given up the fifth most runs per game in the league.