Time for Big Game James to get back on track.

The 39 year-old Hiroki Kuroda goes to the hill for the Yankees today. Since coming stateside in 2008, Kuroda has been about as consistent and dependable as a starting pitcher can be, putting up about 200 innings pitched and an ERA around 3.30 to 3.70. Here is the scouting report on him. 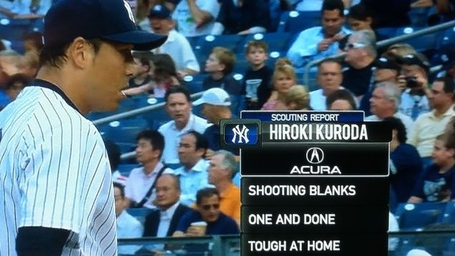 THAT'S WHAT SHE SAID.

Kuroda has an average strikeout rate, but throws strikes and relies on his sinker to induce groundballs. So getting any elevation will be an issue. Enjoy that Eric Hosmer home run from last night, because today he's going to be pounding that ball into the dirt.

Big Game James goes for the Royals, having scuffled as of late. He has given up 17 runs in his last 18.1 innings, covering three starts, and has a 5.12 ERA since the start of May. He has never fared well against the Yankees, with a career 8-15 record with a 4.34 ERA against the Bronx Bombers in 28 career starts. Let's hope he does well today, if for no other reason than to serve as an audition for the July trade deadline should the Royals be out of contention by then.

The Royals have exactly 100 games left. They need to win 56 of them to even match last year's win total. Can they do it?

Will the Royals match or exceed last year's win total of 86?

This poll is closed