The Royals have a chance to make things interesting again in the Central, but face long odds in doing so.

It seems crazy to think of now, but just three weeks ago the Royals sat in first place, having taken three of four from the Tigers in Detroit, a team reeling at the time. Since then, the Royals have gone 8-10 while the Tigers have gone 13-5 to reassert themselves with a commanding lead in the Central Division.

The Royals can make things interesting this weekend with a four-game sweep, but face tremendous odds in doing so. Alex Gordon is likely out for much, if not all of this series. Jason Vargas is unable to pitch the series finale after an emergency appendectomy, leaving Bruce Chen to regale Tigers hitters with his 84 mph fastball. The Royals continue to play the rotting corpse of Raul Ibanez. It would take a pretty special series to make things close in the Central going into the All-Star break. Then again, we have Salvador Perez on our side.

The Tigers are still powered by a terrific offense, ranking fourth in the league in runs scored. Designated hitter Victor Martinez, enjoying an All-Star season, has missed the last few games with a sore back and is questionable for this series. J.D. Martinez (no relation) is on an absolute tear, hitting .358/.378/.717 with 10 HR in his last 31 games. The Tigers lead the league in batting average, on-base percentage, slugging percentage, and doubles. 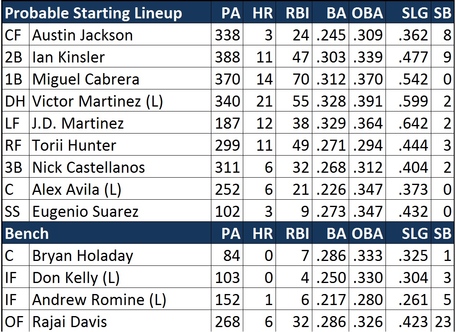 Much has been made about Justin Verlander's struggles this year, but he's pitched a bit better since his last outing against the Royals where he was shelled for seven runs in six innings. In his last four starts, Verlander is 2-0 with 12 runs allowed in 25 innings, with 24 strikeouts and just 4 walks. The Royals will miss Max Scherzer this time around, but the rest of the Tigers rotation has been effective this year.

The Tigers bullpen has struggled all year, and have the third worst ERA in the league. They have been rumored to be possibly interested in trading for Padres reliever Joaquin Benoit or Phillies closer Jonathan Papelbon. Current closer Joe Nathan has struggled mightily all year with a 5.79 ERA and five blown saves, but has pitched well his last three times out. The Tigers have three lefties in their pen, including former Royals farmhand Blaine Hardy, who has held lefties to just two hits in nineteen at bats.