Share All sharing options for: Detroit takes game, spirits of Royals by winning 16-4

This game started off poorly, almost as poorly as the Schlitterbahn slide, Verruckt. Down from the start.

Jeremy Guthrie immediately spotted the Tigers 3 runs in the first inning. However, the Tigers stole the spirits of the Royals by scoring those runs in a Royal manner. After two singles, Miguel Cabrera grounded out to plate the first run. After J.D. Martinez walked, a Torii Hunter single brought in the 2nd run. A sacrifice fly by Nick Castellanos scored the 3rd run of the inning.

The Braves announcers implicated Bartolo Colon's pre-game eating ritual as a possibility for his apparent first-inning struggles. Perhaps Guthrie and the Royals did not sacrifice enough chickens to protect their spirits.

Attempting to regain control over their spirits, the Royals came back in the 2nd inning to score a run in an even smaller small-ball way. Alcides Escobar singled, stole 2nd, and scored on a silly blooper by Jarrod Dyson behind third base.

Lacking a spirit, the thing having been stolen by the Tigers, Guthrie couldn't find the strike zone the whole game. He paid the blood price in the 4th inning. A hit-by-pitch, a single, and a walk loaded the bases for Ian Kinsler, who sacrificed his extra spirit, stolen from the Royals, to score the 4th run. The very next batter, Cabrera, knocked a double that landed at the warning track to score another 2 runs, which prompted a visit to the mound from Dave Eiland. If Alex Gordon had been patrolling left field instead of Raul Ibanez's corporeal form, would that ball have been caught? Maybe. Injuries suck. Anyway, I guess that visit imparted some spirit to Guthrie, since he struck out J.D. Martinez to end the suffering.

But then, in the bottom of the 4th, our much-maligned DH, Billy Butler, clobbered a solo home run out to left-center field off an elevated 89mph meatball that landed in the fountains. Consider the spirit meter slightly less in favor of the Tigers. Only slightly, because Hunter knocked a home run of his own near the Hall of Fame off a spineless changeup in the 5th. A Castellanos single knocked Guthrie out of the game.

Guthrie's final line: 4 IP, 8 H, 8 R, 3 BB, 2 SO. He was terrible. Scott Downs replaced him and promptly gave up more runs by means of more hits. It hardly even matters. Louis Coleman came in after Downs proved spiritless, but he gave up another bunch of runs on a couple singles, a double, and errors by Ibanez, who couldn't keep the ball in front of him, and Dyson. The inning ended with the score 14-2 after 8 runs scored in total. Another run scored in the 7th off Francisley Bueno by means of consecutive doubles. The final run scored in the 9th off a sacrifice fly.

Eric Hosmer hit a two-run line drive homer in the 7th, but the proverbial damage had already been done. Too little, too late. 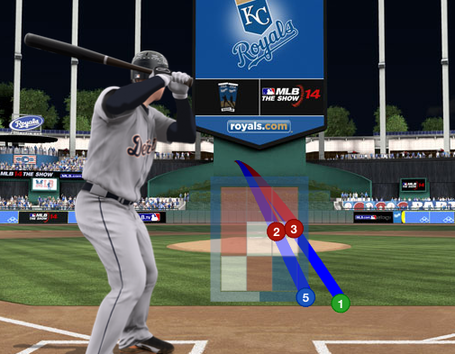