Its a good thing momentum isn't a thing.

Just 24 hours ago, some might have been fooled into believing the Royals had momentum after Salvador Perez's huge three-run game-winning home run in the ninth inning of Wednesday's win over the Rays. The Tigers quickly dashed any such hopes by hanging a 16 spot on the Royals last night. But the good thing is, momentum is largely bunk, as Sam Mellinger points out.

"(Momentum) carries over until the first pitch," says manager Ned Yost. And Danny Duffy gives us a chance to clean the slate and start anew tonight.

Duffy faces Anibal Sanchez tonight. The two faced off a few weeks ago in the series finale in Detroit on June 19, where Sanchez outdueled Duffy to edge the Royals with a 2-1 victory to avoid a Royals sweep. Sanchez has not pitched well since then, giving up 13 runs in 18 innings over his last three starts, including two of the three home runs he has given up this year.

Nori Aoki is back, giving the Royals four outfielders and hopefully ending this Raul Ibanez experiment in the field. Christian Colon returns to Omaha, giving us no reserve middle infielders and eleventy-billion relievers we never use in your typical maddening Dayton Moore roster management. 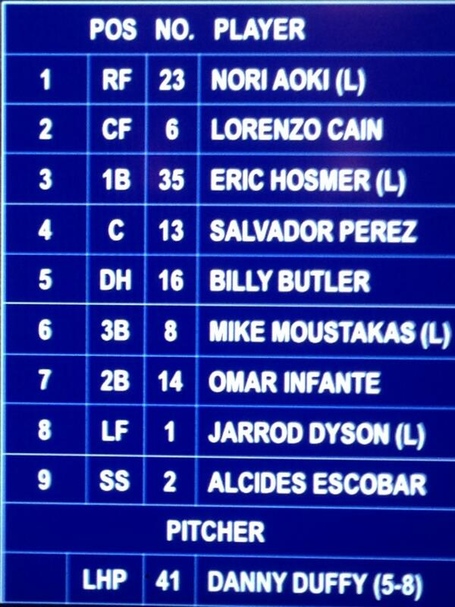 No Raul in the starting lineup. But we'll keep our fingers crossed for late inning heroics.