Eleven hits not enough as Royals fall 2-1 to Tigers

Danny Duffy blows it again by giving up two runs while the offense does its job with eleven hits.

Share All sharing options for: Eleven hits not enough as Royals fall 2-1 to Tigers

Danny Duffy continued to struggle, losing his ninth game of the year by giving up two runs in a blowout 2-1 loss to the TIgers. Duffy failed to have THE WILL TO WIN as he dropped his fourth game in his last five decisions. Duffy was rocked, giving up five hits over six innings of work with no walks and six strikeouts as his ERA skyrocketed to 2.76. The punishment began immediately with Austin Jackson doubling to begin the game, scoring on an ensuing Ian Kinsler single. The offense bailed Duffy out briefly in the bottom of the first when Eric Hosmer doubled and scored on a Salvador Perez single.

Duffy would fall apart again in the third when he threw a ball away on a pick-play with two runners on to put a runner at third for Miguel Cabrera to knock him home for what would be the game-winning run. Manager Ned Yost didn't have the nerve to yank Duffy at that point, letting him go six innings and 99 pitches before mercifully pulling him.

The offense did its part, racking up eleven hits, but apparently that wasn't enough for Duffy to hold on to a win. Eric Hosmer, who has been on a torrid pace lately, racked up three more hits, including his 25th double. Over his last 16 games, Hos is hitting .365/.452/.559. The offense tried to bail Duffy out in the eighth when Nori Aoki led off with a single, then appeared to steal second and advance to third on a throwing error by catcher Bryan Holaday. But umpire Chad Fairchild ruled Lorenzo Cain interfered with Holaday's throw.

You be the judge. 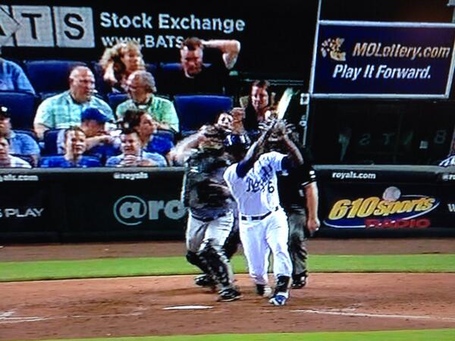 Cain was ruled out and Aoki returned to first. Eric Hosmer followed with a single, but the Royals would end the inning without a run.

There was still hope in the ninth as Tigers struggling closer Joe Nathan gave up a single to Omar Infante and a walk to Jarrod Dyson with one out. But Nathan retired Alcides Escobar and Nori Aoki to end the game as a sad Raul Ibanez watched from the bench.