The Star wants you to pick a Royals dream team. We are critical spirits, of course, so we list our Royals nightmare team.

Share All sharing options for: The Royals all-time nightmare team

The Kansas City Star is asking readers to vote on the All-Time Royals Dream Team, which honestly is a bit boring and has been done several times before. I could probably list the team off the top of my head - Darrell Porter, John Mayberry, Frank White, Fred Patek, George Brett, Willie Wilson, Amos Otis, and I don't know, Emil Brown. We here at Royals Review have been rightfully accused of being critical spirits, so let's instead look at the All-Time Royals Nightmare Team. Warning: do not each lunch while reading this.

Mayne was a first round pick who was so terrible, the Royals saw fit to bring him back for a second go-round. As a Royal, Mayne hit .244/.305/.322, and this was during some of the Silly Ball Era. Mayne was supposed to be a terrific defender, but his dWAR as a Royals is a meh 3.4. His best offensive season came in 1994 when he hit a whopping .257/.323/.347 with 2 HR 20 RBI. The club liked Mayne so much at one point, they were willing to eat into Mike MacFarlane's playing time and eventually let him walk. They later liked him so much, they traded two players (Sal Fasano and Mac Suzuki) to Colorado just to re-acquire him.

Harvey was another first round pick who was actually an All-Star at one point, although that selection was a bit of a joke. Harvey was hitting .305/.353/.452 when he traveled to Houston to represent the Royals in the Midsummer Classic. He hit just .256/.311/.366 the rest of the way and two years later was out of organized baseball. And of course, we'll always have this:

Chico Lind was a known for being a defensive marvel for the Pirates powerhouse teams of the early 90s, so the Royals considered it a coup when they were able to acquire him to build a defense-first club in 1993. Lind, who was not a cheap player at this point, was a complete black hole at the plate, hitting just .248/.271/.288 his first season in Kansas City for an OPS+ of 47. The Royals thought that was so terrific they signed him to a two-year contract extension. Eventually the poor offense became too unbearable for them, and the Royals let him go, sending Lind into a spiral of despair that led to an embarrassing incident where he was pulled over by police drunk and without any pants.

Ah, so many good candidates here! Another two-timer with the Royals, the Yuniesky Betancourt trade from Seattle was perhaps the first sign Dayton Moore just didn't get this stats stuff. Betancourt was known for being a free-swinger with a lackadaisical attitude towards baseball, but the Royals felt they could turn him around to justify his multi-million dollar salary. Betancourt did hit 16 HR and drive in 78 in his first full season in Kansas City, but his terrible on-base percentage (.288) and awful defense (-1.9 dWAR) actually made him a below replacement level shortstop. The Royals were able to dump Betancourt on Milwaukee in the Zack Greinke deal, but like herpes, Betancourt returned, signing as a free agent with the Royals in 2012. 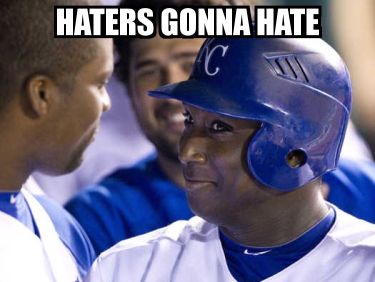 Phil was once considered a terrific prospect who hit 29 home runs once in the minors for the Royals, but he had absolutely no idea what a strike was, striking out an amazing 160 times in a minor league season. The Royals gave Hiatt the third baseman job in 1993, only to see him flounder with a line of .218/.285/.366 with absymal defense. Hiatt was shipped all the way to AA, returning only briefly in 1995, this time as an outfielder, before the Royals dealt him to Detroit. Hiatt would become a monster power hitter in AAA, twice enjoying a 40 home run season, but he would appear in just 37 big league games after leaving Kansas City.

Brown was a monster prospect with the Royals, at one point named the #11 prospect in all of baseball by Baseball America. The former first round pick could do it all, hit for power, hit for average, draw walks, run, and throw. Joe Posnanski once wrote a really brilliant and detailed column (that is unfortunately lost in the Kansas Star paywalled archives) about how it all went off the rails for Brown, with some blame on the young, immature Brown, and some blame on the Royals handling of him, but everyone can agree it definitely went off the rails. With Johnny Damon and Carlos Beltran on the team at the same time, Royals fans envisioned a Murderer's Row at Kauffman Stadium. Instead, Brown hit just .245/.286/.350 with 7 HR 40 RBI in his only real full-time crack at a big league job.

Joey was one of the first significant acquisitions of the Dayton Moore era. He took a disappointing fringy-looking starting pitcher named J.P. Howell and swapped him for speedy Tampa Bay outfielder Joey Gathright. In fairness, Gathright had demonstrated some on-base skills in the minor leagues, and he really could fly. But his defense and base-stealing was overrated, and Gathright had absolutely zero power, posting a .273/.336/.311 line during his time in Kansas City.

I mean its still early, and Aoki has a good track record and I really liked the trade at the time, but Aoki has the worst WAR out of any right-fielder in franchise history. Aoki came to town with the reputation of being a good on-base player who could slap some doubles, a player that seemed tailor-made for Kauffman Stadium. Instead, Aoki has struggled mightily and has turned out to be a huge liability on defense, although, like Ken Harvey, he at least provides with hilarious results.

"It should be Billy Butler! He hits into a double play like every single time, amirite! Thank, I'll hang up and listen off the air."

Joe Vitiello was a first round pick out of Alabama (ROLL TIDE) who showed some power in the minors, but never translated that into any Major League success. After hitting .344 (with just 10 home runs) in AAA in 1994, the Royals brought Vitiello up mid-season in 1995 to replace the disappointing Bob Hamelin. Vitiello hit okay at .254/.317/.446 with 7 HR in 53 games, giving him a crack at the full-time designated hitter role in 1996. Vitiello hit .241/.342/.401 which isn't terrible, but aren't the numbers you want from a full-time designated hitter (just ask Royals fans in 2014). With no position to play really, Vitiello was sent back to the minors, where he mashed for a few years before washing out of baseball.