The Red Sox have had a difficult hangover since winning the championship last year.

Share All sharing options for: Red Sox Series Preview: Back to baseball

The Red Sox won their third championship in a decade last year, but the hangover since then has been rough. The team got off to a decent enough start, but a ten game losing streak in May put them in a deep hole they have not dug themselves out of. They come into tonight's game 43-52, and while they say they haven't given up on the season, they are a full eight games back of the closest playoff spot.

The Red Sox, long known as being a top offensive club playing at Fenway Park, have the lowest runs scored total in the league, and the second-worst runs per game at 3.86. While they are sixth in on-base percentage and second in walks, the power has just cratered, as they are 13th in home runs and dead last in slugging percentage. While sluggers David Ortiz and Mike Napoli have continued to have good seasons, All-Star second baseman Dustin Pedroia has been decidedly average, and the rest of the club has been putrid. The Red Sox were counting on young players like Xander Boegarts and Jackie Bradley, Jr., but while they have disappointed, it has been an overlooked utility player named Brock Holt who has turned in the best rookie performance for the Red Sox. 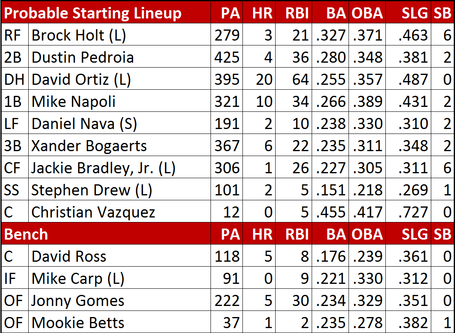 Jonny Gomes and Mookie Betts could enter the lineup against left-handers, replacing Nava and Bradley (or Stephen Drew, with Holt moving to third base and Boegarts moving to shortstop). Outfielder Shane Victorino was hoping to return from his injury rehab assignment this weekend, but the Red Sox say the will evaluate him at the end of the weekend. Third baseman Will Middlebrooks is also on injury rehab assignment.

The Red Sox pitching has been decent with the staff fourth in the league in ERA at 3.83, and the club is right at league average in runs allowed per game at 4.26. Clay Buchholz has struggled mightily this year, but has come on strong lately and tossed a three-hit shutout his last time out before the break. Jon Lester, who once no-hit the Royals, has been outstanding this year.

Boston relievers have the best strikeout-to-walk ratio in the league, and overall the pen has been effective. Koji Uehara has been a lights out reliever with a 1.65 ERA and 57 strikeouts and just 6 walks in 43 2/3 innings. Junichi Tazawa and Burke Badenhop have been effective late-inning options from the right side. Andrew Miller has been a dominating situational lefty, holding left-handed hitters to a line of .170/.228/.245, while fellow LOOGY Craig Breslow has been much less effective.

The Royals were 5-2 against the champs last year. To stay in the Wild Card race, they'll have to take advantage of the Red Sox while they're down.