Another one run loss. Ho-hum.

I liked it better in the All-Star Break when the Royals weren't playing.

Kansas City loses the second straight game to Boston 2-1 and their 16th of their past 25 games since ascending to the top of the division. Furthermore, they lower their horrific result in one run games to 10-20 despite sporting two of baseball's best relievers having amazing seasons.

With Danny Duffy pitching, the result was predictable.  Duffy went 6 2/3 innings, giving up 2 runs, 1 earned, scattering 6 hits and 3 walks across the frames while sprinkling in a duo of strikeouts.  Two plays in particular really stung.  In the bottom of the 4th, Mike Napoli blooped a single to the outfield and Johnny Gomes walked.  Shane Victorino hit a routine double-play ground ball to shortstop which Alcides Escobar fumbled, allowing Napoli to score.  There was no weird bounce and it wasn't hit particularly sharply, so Escobar's error was entirely on him.  Then, in the bottom of the 6th, Duffy threw a meatball in the vein of Adam Wainwright, elevated and in the center of the plate, to Napoli who righteously blasted the little white sphere over the Green Monster.  Other than those two plays, Duffy's results were superb, although he struggled with command at times and was not overpowering.

In the first inning, Eric Hosmer extended his hitting streak to 15 games.  Though Hosmer is apparently the most important part of the Royals offense, they are only 6-9 in that streak.  The Royals' offense continued to sputter, of course.  Jarrod Dyson's leadoff triple in the top of the third was the only real life showed by any Royal.  Omar Infante hit a sac fly to score him, but, alas, that was it for the KC O.  Billy Butler did his best to hit into as many double plays as possible, Alcides Escobar continued to flounder at the plate, and Mike Moustakas furthered his case as most disappointing Royal with yet another infield popup (although he did walk).  This continues the disturbing trend of not scoring for Duffy, as his run support is at 2.76 runs/game, which would be lowest out of any starter if he had enough innings to qualify.

If you're a calendar-enjoying sort, circle July 29.  That coincides with game 105.  The narrative this whole year has been that, if the Royals could stay ahead of last year's disappointing start, they would be in good shape.  Last year, the Royals finished a 9 game winning streak and stood at 54-51 after 105 games.  This year's squad stands a very good chance of falling behind that team unless they kick it into high gear.  Then what will the PR machine do with the narrative????

Regardless, the Royals stand at 48-48 and face the excellent John Lester tomorrow.  Things do not bode well for this squad. 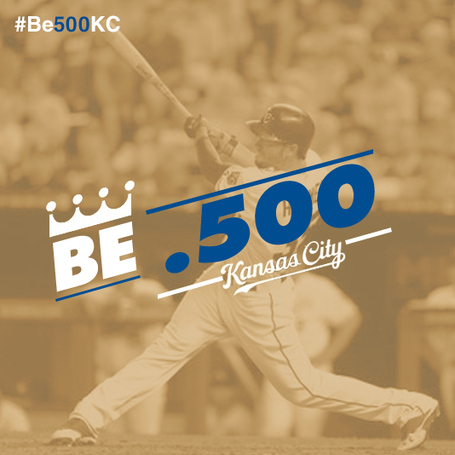