Another disastrous series and the Royals tumble into fourth place. Let's not do that.

On June 18, the Royals stood in first place in the American League Central Division at 39-32, with the fifth best record in all of baseball. Since then, the Royals have dropped 17 of 26 games, and only the Rockies and Rangers have lost more games over that stretch. Kansas City has gone from being 1.5 games up in the division, to seven games back, and have dropped all the way to third place. Another sweep this week in Chicago, and the Royals will find themselves in fourth.

Chicago has dropped six of nine to Kansas City this year, including a sweep a U.S. Cellular Field in early June. The White Sox are in a rebuilding year, and have an offense that is in the middle of the pack in nearly every category. Overall, they are sixth in runs scored, near the league average at 4.29 runs per game. They are sixth in the league in home runs, although 29 of their 99 team dingers come from Cuban rookie Jose Abreu. The club is just twelfth in on-base percentage, tenth in walks, and they strikeout more than any team other than Houston, but when they do make contact the ball goes far, as their .403 slugging percentage is fifth in the league. 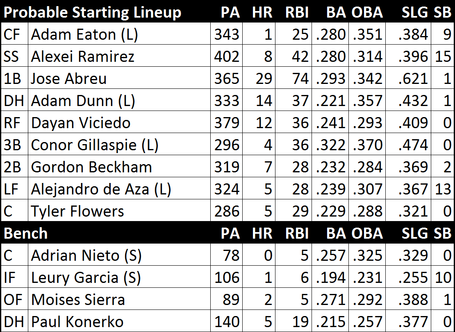 There have been a few that have speculated that Viciedo could become a trade target for the Royals if they are looking to upgrade rightfield, but the free-swinging, defensively-challenged Viciedo would likely not be much of an upgrade. The White Sox somehow score more runs than the Royals, despite hitting just .253 with runners-in-scoring position, compared to the Royals .262 average.

The Royals will get to face Chicago's two best pitchers in Chris Sale and Jose Quintana, a pair of young lefties. In between, the Royals will get a reprieve against Kansas City native Scott Carroll, who they rocked back in Kansas City on May 19 only to lose the game. Sale has a 2.45 career ERA against the Royals in 92 innings and pitched eight shutout innings against them in a win back on April 6.

The White Sox bullpen is the second worst at striking out hitters, and the worst at strikeout-to-walk ratio. The White Sox operate with a closer-by-committee after Ronald Belisario lost the job in late June. Matt Lindstrom and Nate Jones have both been out for extended periods, decimating an already thin bullpen that traded closer Addison Reed to Arizona last winter. Rookie Jake Petricka and Zach Putnam will likely see the bulk of the late inning work, with the inexperienced Eric Surkamp as the lefty-specialist.