Taking a look ahead to the 2015 payroll

Share All sharing options for: Taking a look ahead to the 2015 payroll

With the future of the organization potentially impacted by the moves of next week's trade deadline, I thought we should all take a quick look at the 2015 payroll to see where the Royals stand for next year financially. Much of this was already covered by kcstengel last week, but I wanted a handy-dandy reference to make sure we're all on the same page on what kind of financial picture we're looking at for the Royals in 2015.

The Royals have six eligible free agents this winter:

Wade Davis has a $7 million club option for next year, in addition to club options in 2016 and 2017 totaling $18 million. If the Royals decline the option, Davis is still under club control, although eligible for arbitration. In theory the Royals could decline the option, go to arbitration, and my spitball guess is that Davis would earn about $6 million or so in arbitration. EDIT: This would require the Royals to pay $2.5 million in a buyout, making such a move unlikely. However, I don't know if that voids the remaining club options, and the Royals may want to retain to keep him under club control past 2015, when he would otherwise be eligible for free agency. For now, let's assume the Royals pick up the option.

The Royals have EDIT eleven arbitration-eligible players this winter:

Let's take a quick look at those potential arbitration cases:

J.P. Howell was looking like a decent non-LOOGY strikeout left-handed reliever when he had a terrible year his second year of arbitration and took a small raise to $1.35 million. Collins earns $1.362 million this year, so if he returns, he'll likely only see a small bump. Really, the best recent comp I could find was Tony Sipp, who was let go after his first arbitration season, which is what I imagine the Royals will do with Tim Collins.

Crow has been a pretty consistent performer, earning $1.475 million in his first year of arbitration. Casilla had more of an inconsistent track record and was older, but put up better ERA seasons. Casilla earned $2.2 million in his second year, which sounds about right for Crow.

Its hard to find too many starting pitchers with as few innings as Duffy who reached arbitration that quickly. Liriano had a terrific first full season in the big leagues with a 2.16 ERA, but struggled to stay on the mound before he reached arbitration, earning $1.6 million.

The going rate for pretty much all arbitration-eligible no-hit backup catchers is $700k.

Herrera will be a Super-Two eligible for arbitration due to his service time, even though he has less than three years of service time. Both Herrera and Gregerson were high-strikeout setup men, Gregerson earning $1.65 million in his first year of arbitration.

Its hard to find too close of a comp, but heading into his second year of arbitration, Loney was hitting .288/.348/.436, not too far off Hosmer's .276/.329/.417. Loney saw his salary go from $3.1 million to $4.875 million. Hosmer earned $3.6 million last year, so we can probably expect his salary to go to about $5 million. If he goes back to slumping however, he could follow the lead of Ike Davis, who accepted a deal for only a slight raise in his second year of arbitration after a .661 OPS season.

Its hard to find anyone that was as bad as Moustakas who reached arbitration before washing out. Kevin Kouzmanoff I suppose is the best recent comp I could find, a low on-base guy who had some pop, although Kouz's numbers are much better than Moose's. Kouzmanoff earned $3.1 million in his first year of arbitration, although he had better traditional numbers (HR, RBI) than Moose.

There aren't that many part-time third basemen because it doesn't make much sense roster-wise. Murphy fits Valencia's bill a little as a decent power, low on-base, part-timer who can hit lefties. Murphy makes $825,000 this year for the Rangers in his first year of arbitration.

So let's take a look at the 2015 roster with these arbitration numbers in hand. 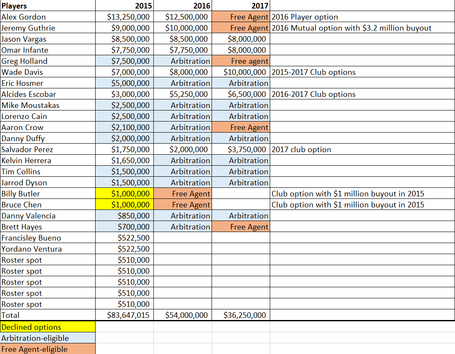 Geez, Salvador Perez is a steal.

If the Royals want to stay in the $90-95 million range as far as payroll, they'll only have $7-12 million available to them this winter. They can free up more payroll space by trading one of Wade Davis or Greg Holland, but don't expect many takers for Jeremy Guthrie. A marginal amount of space can be freed up by non-tendering Tim Collins, Danny Valencia, and Brett Hayes. Still, that should leave the Royals enough payroll space to significantly upgrade right field or designated hitter and possibly add a middle-of-the-rotation starting pitcher - the final pieces to the championship puzzle.