Yordano Ventura: Lay off the fastball

Yordano Ventura: Lay Off the Fastball

Share All sharing options for: Yordano Ventura: Lay off the fastball

Yordano Ventura has all the ability to possibly be the ace pitcher KC as been looking for since Greinke was traded. All his pitches are above average pitches with elite fatball velocity. Right now he his just too predictable with his pitch type in some counts and needs to use his curve and change more often. Hitters are taking advantage of him in these counts

A decent group of pitchers, but not elite. I think he can do better than them.

Looking at his individual pitches, they each rate above league average in groundball rate (GB%) and swing strike rate (SwgStk%) except the SwgStk% from his two-season fastball.

As an rule, he should have faith in all his pitches, but he doesn't when behind in the count. Here is a pitch usage graph divided up by count and hitter handedness. The counts are in order from pitcher friendly (0-2) to hitter friendly (3-0) and are combined 2013 and 2014 values. 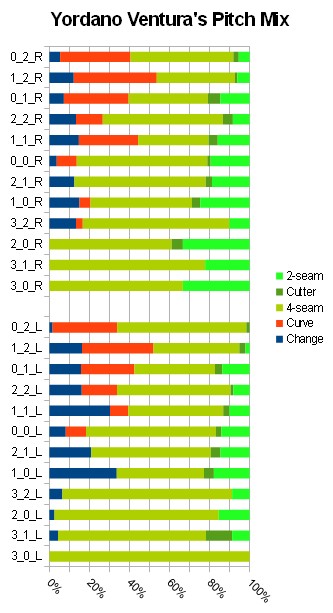 For left-handed hitters, he is even more predictable. If the hitter is ahead, Ventura hasn't thrown one curve ball. Repeat, not a single one over two seasons. Also, he effectively drops the change if the count is 3-2, 2-0, 3-1, 3-0.

With both right and left-handed hitters seeing a high percentage of fastballs once ahead, Ventura has a fairly wide Ahead and Behind split. When Ventura is ahead in the count and using all of his pitches, hitters are batting .163/.169/.275 against him. When he is behind the numbers jump to .305/.465/.466.

In my opinion, it would be wise for Ventura to throw the occasional curve or change when behind in the count. Hitters won't be sitting on his fastball as much and he may be able to work the count back in his favor. By varying his arsenal, he may be able to to make the jump to the top pitchers in the game.