You're doing a heckuva job Yosty.

Dayton Moore is visiting Chicago I'm sure to give a stern tongue-lashing to the disappointing Royals who have stumbled out of the gate since the All-Star break, dropping their first four contests. A General Manager making a road trip with the team is unusual, unless he's planning to fire the manager. Not so in this case!

Moore said he had been planning this trip for weeks, and indicated manager Ned Yost was in no danger. Asked about for an appraisal of Yost’s performance and an update on his status, Moore delivered a vote of confidence.

Dayton, who once openly wept upon the firing of the first manager he hired, Trey Hillman, affirms that he and Ned Yost are partners in this voyage through mediocrity, and that everything is bound together, as he waxes philosophically:

"All of our success in this organization is tied together," he told The Star in a telephone conversation. "We’ve fought through some challenging times in the past. We’ll do it again. Together"

I believe he read that off a Hallmark greeting card.

Dayton also takes Alex Gordon's advice, and blames just one man for this disappointment - the man in the mirror.

"It’s been frustrating," he said. "But I look at myself. I’m accountable for this. I look at what I can do. I’m not blaming anybody else. I’ve got to look internally at myself and what I can do, how I can contribute."

Dayton also indicated the club is looking to improve through trades and that the club will not be sellers for the trade deadline in nine days. Even as he said that though, he knows that he can't fix the team by acquiring one player.

#Royals' Moore on trade rumors: "We're not just one hitter away...we've got a lot of holes right now."

Oh. But the important thing to remember, is that we're in this together. 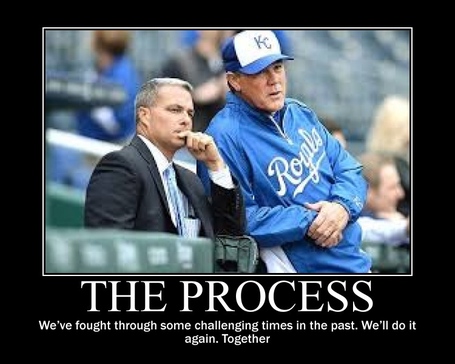