The Potential Cost Effectiveness of Trading for James Shields

Share All sharing options for: The Potential Cost Effectiveness of Trading for James Shields

As the trade deadline looms, teams get a better idea if they are buyers, sellers, or holders. Most teams are sellers and holders, but there are of course a few teams that are in a nice enough position to be buyers.

Unfortunately it seems like the Royals should be the sellers or holders position, and leaning likely towards sellers with some of their assets. As of this writing the Royals playoff odds stand around 11%. While they are basically given an impossible chance to win the division, there is some speckle of hope out there that they could capture a wild card spot. Again as of this writing they are 3.5 games back of the second wild card spot, but the problem isn't the amount of games back but the fact that there is three other teams in front of them and all who project to be better going forward than the Royals.

The Royals just clearly aren't in a position to win a playoff spot this year, and they shouldn't pursue that route. That's just my opinion and you should form your own. To me, it just isn't worth the Royals being buyers, or possibly even holders, for a shot at a coin-flip game like the one game wild card. If the Royals made small cost-small reward moves, much like the Yankees are doing, then I would have no problem with them going for the wild card, but it seems like they are looking to make a "big splash" that would only provide a marginal improvement in their WC/playoff odds. Do you really trust Ned Yost's decision making in a one-game playoff? He would easily leave Shields/Vargas/Guthrie in to face hitters in a third time around when, unless you have Clayton Kershaw, your starter probably shouldn't go past the 6th inning in a 50-50 game.

The hot talk of the town as far as an impact piece goes is David Price. Maybe I should clarify and say a realistic impact piece, because it seems like the Rockies (foolishly) aren't going to trade Troy Tulowitzki.

Jeff Sullivan has prognosticated that a team acquiring David Price could boost their playoff odds anywhere from 5% to 15%. 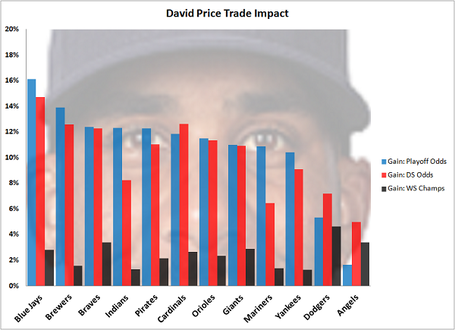 By regular playoff odds, no one would stand to benefit more than the Blue Jays, which we've got gaining about +16%. I shouldn't need to remind you of all the potential sources of error, but that seems sensible enough to me, as the Jays are in a tight race for the AL East lead and for the Wild Card. Unsurprisingly, the Jays are said to be in the market for front-level starters, even though lately they've been more damaged by injuries to the position players.

While Price is a likely heavy price tagged trade piece, certainly he's a game changer for some teams to acquire and one that a team would need to mortgage part of their future for a shot at 2014 and 2015 given a teams control over Price.

One thing to always remember is that teams don't get David Price's first few months of this year where he has produced 3.5 fWAR so far, they get what Price is expected to do the rest of the season and next year. For the purposes of this article we'll solely focus on this year.

I'll give you two pitchers ZiPS rest of season projections (I'm sure you know who is who already but just play the damn game with me please):

Okay now the obvious reveal; Player A is James Shields. Player B is David Price.

The projected difference between Price and Shields is 0.3 fWAR or essentially Jeremy Guthrie's total value so far this year less his ridiculous contract.

David Price is a better pitcher now than Shields is and will likely continue to be for the foreseeable future, but for the purposes of 2014, Shields is close to Price. Price has an additional year of control, albeit at something like $18-20,000,000, and teams won't be able to offer Shields a qualifying offer if they were to trade for him, but Shields has some similar value to Price if you want to look at a current asset.

The point being is that a team could trade for James Shields at a lesser cost than David Price and still receive relative possible value... of course Shields or Price could be traded tomorrow then be injured come Friday and the tradee receives nothing in reality except an insurance claim.

Let's get it straight that Shields isn't going to return the front end of any of those three packages. Taveras, Walker, and Seager are too much to ask for a rental like Shields given that he's a free agent in about 3 1/2 months and his age. The Zack Greinke trade has some correlation to this scenario given him being a front line starter with impending free agency, but Greinke was a better pitcher than Shields.

Matt Garza is another similar case where the Cubs were able to flip an impending starter for a good prospect and a once good prospect. Shields is a better pitcher now than Garza was when he was traded and Shields carries no real injury risk (other than the fact that he throws a baseball for a living).

Greinke netted Jean Segura who was ranked the #55 overall prospect by Baseball America that year, and two lottery tickets in Johnny Hellwig and Ariel Pena.

Garza netted CJ Edwards (who was un-ranked at the time but was ranked #28 overall this offseason), Mike Olt (a once borderline elite prospect who had fallen from grace almost overnight), and Justin Grimm (a B-/C+ level prospect).

I think it's debatable which package was better due to the variables. Segura was the highest ranked prospect at the time of each trade and he just put up a three win season at age 23 last year.

Edwards was un-ranked at the time of the trade, but was doing very well in A-Ball and would eventually be placed into borderline-elite territory. The other factpr in this trade is that Garza wasn't as good a pitcher as Greinke. You'd expect Greinke to net an excellent package even for half a season of control. I don't think you could have expected the Cubs to get an excellent package out of Garza but alas they did.

If a team is looking for a solid upgrade or alternative to David Price at what would perhaps be half the cost, then Shields would make a good target... that is if the Royals are smart enough to sell him.