Indians Series Preview: Are we in or are we out?

This series will probably go a long way towards determining whether we are buyers or not at the trade deadline.

Share All sharing options for: Indians Series Preview: Are we in or are we out?

The Royals have been connected to a fair share of trade rumors lately, but its not at all clear that they should be buyers at the deadline. While they have already said they will not be sellers, they also stress that they are not one hitter away, and that they believe in their internal options to improve the ballclub. Whether or not they do become buyers by next Thursday's trade deadline depends in large part on what happens with this weekend's series against fellow Wild Card chaser, the Cleveland Indians.

The Royals have won four of nine contests against the Indians this year, sweeping them in a short two-game series in Kansas City during their ten-game winning streak, but dropping two of three in Cleveland over the Fourth of July weekend. The Indians have won 12 of their last 19, crawling back into quasi-contention with the Royals for the second Wild Card. They stand 51-50, half a game ahead of the Royals, but still a full two games back of Seattle for the last post-season spot.

The Indians are fifth in the league in runs scored per game, scoring nearly half a run more per contest than the Royals. They are seventh in on-base percentage and seventh in slugging percentage and feature a lineup with four hitters with an OPS+ over 110. 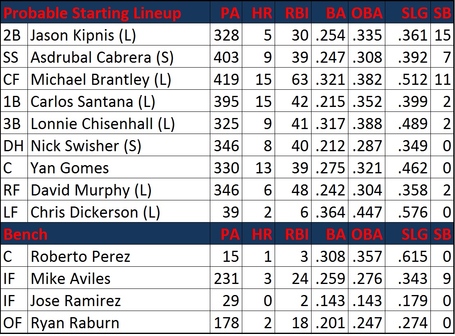 Centerfielder Michael Bourn is out until early August after injuring his hamstring in the last series against Kansas City. Asdrubal Cabrera has been out the last few games with back spasms, and Jose Ramirez or Mike Aviles could start in his place. The Indians play matchups a lot, so you should see Ryan Raburn and Mike Aviles in against left-handed pitching with possibly Murphy, Dickerson, or Chisenhall sitting.

The Indians starting pitching has the third worst ERA among all starters, but are second in strikeouts per nine innings. Justin Masterson has had the most struggles, but he has been out with a knee injury and will make one more rehab start in the minors before returning, causing him to miss this series. Tonight's starter Corey Kluber is one of the most underrated pitchers in the league. He's eighth among all league starting pitchers in rWAR and seventh in strikeouts per nine innings.

Indians relievers have the second lowest ERA in the league, despite featuring a mix of anonymous journeymen. Cody Allen has taken over closing duties from John Axford, and he has pitched well with 13 saves in 14 chances. The Indians feature three left-handed relievers in their pen, veteran Marc Rzepczynski, journeyman Nick Hagadone, and rookie Kyle Crockett.

Note that Saturday's game will not be on Fox Sports Kansas City, but will instead be a nationally televised game on Fox Sports 1 with Rex Hudler and Justin Kutcher on the call.