Baseball was played. Horribly. For a long time. But somebody had to win.

Looks like the batting practice bats hid behind the couch again. The punchless Royals failed to score more runs than I have thumbs. In fact, the Royals offense was so inept that Corey Kluber had a perfect game going in the 7th inning, when Omar Infante roped a line drive up the middle. Infante got himself out on the bases to end the inning anyway. #RoyalsFreeOut. Danny Duffy had a pretty good game, though. He threw 7 innings of 2-hit ball with 2 walks and 7 strikeouts and no runs. Good stuff.

The shutout ended in the next inning, the 8th, when Mike Moustakas scored on a bizarre play. I'll try to describe what happened. Moustakas, in typical Moose fashion, hit a weak fly ball to the left field line. Ryan Raburn ran over to make the play, but the ball caromed off his arm and into foul territory. The ball was, in fact, fair. However, Raburn, after retrieving the ball, just to make sure the ball was fair, THREW THE BALL INTO LEFT FIELD. I'M NOT EVEN JOKING. Raburn, a man whose job description includes throwing the ball to other players, threw it where there were no players. Moustakas rounded the bases and scored. Does that count? I don't know. Do we even baseball? 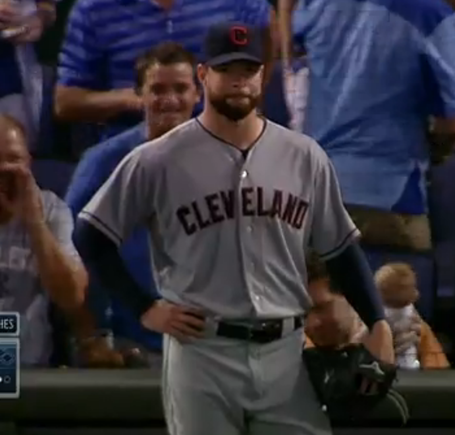 The Royals quickly coughed up the lead the next inning after a walk, a sacrifice, a groundout, and a single. Greg Holland blew it. It doesn't happen that often, though.

Ok, seriously, I can't even concentrate on anything else that happened in this game. This guy was there, too. 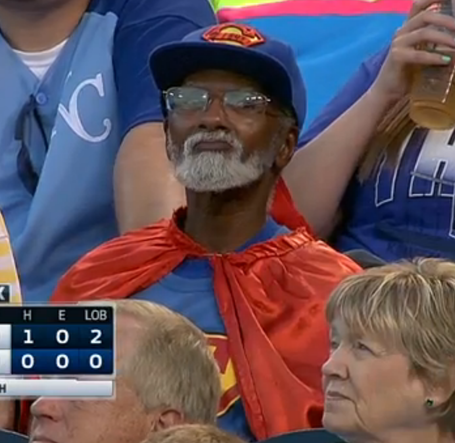 So, after Holland blew it, the game went into extra innings, when nothing happened for awhile. The Royals mounted a threat in the bottom of the 11th; Raul Ibanez, that guy, came into the game for Eric Hosmer and doubled with 2 outs. Norichika Aoki softly grounded to shortstop Jose Ramirez and was initially ruled safe, but the Indians challenged the play and won. It looked pretty darn close to me; I think I would have left the call alone, but maybe I'm biased.

Ok, seriously. That play. Here's a gif. A poorly made one, but my gifustration skills are not good.

Lorenzo Cain singled in the 14th to put another runner on to try to end this madness. Danny Valencia pinch-hit for Ibanez because Mark Alphabet Soup, a lefty, was pitching. Francona put in John Axford, a righty, to face Valencia. LoCain stole 2nd, but again the Indians challenged the safe call. This time, though, the call stood. Valencia struck out, so whatever. Up came Aoki. With the way this game went, it felt appropriate that Aoki brought in the winning run. Aoki struck a single to left field, and Cain scored to put this game out of its misery.

In the end, both offenses were terrible, and weird baseball happened. The Royals are back in 2nd place.